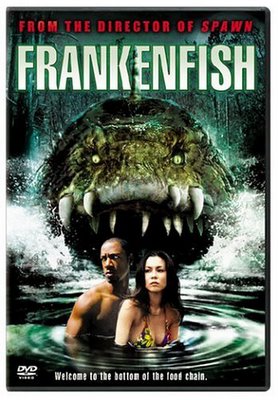 My friend and I watched this one the other day. Three cheers for "Frankenfish"! Wow. We needed that. Most B-movies we see end up causing us much distress. This one got a standing ovation. Bravo "Frankenfish"! You made our night.

I can't tell you how many times we rent a monster movie hoping to actually see a monster and then get ripped off by the lying video box cover. Fraud on a video box cover is a recurring theme of mine but I wish it wasn't. We often wonder why they put a monster on the cover and then don't bother to show one in the movie. "Frankenfish" has learned from other's mistakes. The fish monster is on the box and in the movie.

"Frankenfish" also gives us the return of China Chow. I always wondered where she went to after "The Big Hit". That was a pleasant addition to the horror flick. But the real stars of "Frankenfish" are the giant snakehead fish monsters. China and company go into the swamp and are pinned down by the Frankenfish on a couple of houseboats. The Frankenfish are ruthless beasts who relish the opportunity to chew on anyone they can nail. 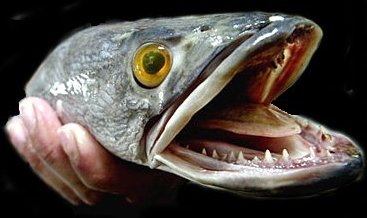 Awesome! I was wondering if this was any good. Gonna have to rent it now. Does it have ample boobage in it? Because that's the main ingredient in a good B Movie.

Also, I left you a comment under your Haunted Desires review.

The boobage is low in "Frankenfish". So low that I don't remember seeing any nippleage. Is that a word? It is now. I was hoping China Chow was going to go the B-movie queen route and flash the Chows. No such luck.

There are two boob shots of topless women, one from a gangster's girl or something, and one from a blondie in the swamp houseboats.

Also, you can pick this DVD up now at some Walmarts and potentially other places (online?) for $4.88

How about $3 from Big Lots?
As a lifelong fisherman it is nice to see fish bite back.
Yeah it is corny and a bit predictable, but nice CGI and I only wish Roland Martin did a cameo as an obnoxious pro fisherman who gets "caught in the act"