I bought this DVD. I bought it because I saw that Erika Smith was in it. I saw her in "Bite Me!" and liked her in that. She's funny, got a nice body and she's a pretty decent actress to boot. Of course, "Bite Me!" was a horror comedy so it wasn't an all out sex marathon like other Seduction flicks. Erika was a stripper in "Bite Me!", she stripped a little but there was no major action. When I saw that she was starring in her own lesbian vampire flick, I knew that this was a film I had to see right away.

Hmmmm, I can think of one glaring omission from "The Sexy Adventures of Van Helsing": Van Helsing, (Erika Smith), does not have any sex. This makes me sad. Interesting new B-movie tactic. They put a girl on the cover of their lesbian vampire flick but don't let her have anything to do with lesbians or vampires. Quite ingenious. I would also like to point out that she's on the DVD cover wearing a cape and a tight leather vampire killing outfit. This outfit does not appear in the actual movie. Of course it doesn't. Why should I expect anything less? She's wearing a white t-shirt through most of the movie. As far as nudity goes, she gets a little naked at the beginning and then that's that. Erika's sex kitten debut is a letdown.

Of course, the movie's not completely worthless. I mean, there is still plenty of lesbian sex. There is a pretty hot scene at the end as Erika convinces some ladies to party in Dracula's crypt. This party scene saves the movie. Erika is pretty funny as the goober girl who turns into a vampire hunter.

But to be honest, I didn't buy this movie to have Erika show off her acting skills. Of course this brings up the most important question about this movie: Why is she starring in a lesbian vampire flick if she's not going to be participating? Why the shyness? Why? Why I say? You call yourself a Van Helsing? You come from a "long line of lesbians"? I just can't believe it.

SCORE: 2 out of 4 because Van Helsing's adventures were not as sexy as they should have been 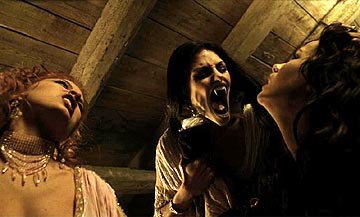