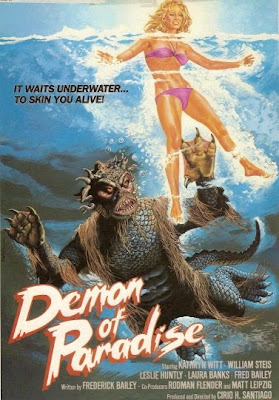 Kathryn Witt ... Annie
William Steis ... Keefer
Laura Banks ... Cahill
Frederick Bailey ... Ike
Leslie Scarborough ... Gabby (as Leslie Huntly)
Henry Strzalkowski ... Shelton
Nick Nicholson ... Langley
These B-movies really know how to sell themselves to a guy like me. I saw the video box cover and knew that this was a movie I had to rent. It had an illustration of a lizard man dragging a bikini-clad girl underwater. Illustrated covers are usually a sign of bad things to come. But since I never seem to take my own advice, I rented it anyway. I mean, come on! It had a lizard man and a girl in a bikini for crying out loud. It's got to be good.
A bunch of fishermen throw dynamite in the water and wake up the Demon of Paradise. This demon loves dynamite as he causes massive explosions with alarming regularity. It doesn't faze him as the monster loves the smell of dynamite in the morning. It smells like demon victory. Lizard man proceeds to attack everyone at the resort and only a few brave souls can stand up to him.
"Demon of Paradise" went exactly like I expected it to. It's a standard B-monster movie with a low budget and a cheap rubber costume. The demon had this hilarious habit of waving to his victims. Sometimes it seemed like he was trying to signal the director he was drowning but I think he was actually trying to scare his prey. Jaws sticks his fin out of the water when he charges his prey. The demon waves at you. It looked like he was waving from miles away but then he would suddenly appear and attack. Then there would be an explosion. No particular reason, just spontaneous demon combustion.
Another scene had the demon tackling a helicopter. The fools were dropping dynamite on him. Little did they know how much dynamite excites him. The demon shoots out of the water like a missile and drags the helicopter into the water. Then there was an explosion. Truly, a fine B-movie moment.
"Demon of Paradise" is cheap and stupid but entertaining. As these things go, it was decent. It gave me a few laughs. Demons, bikinis, etc.
SCORE: 2 out of 4 waving demons 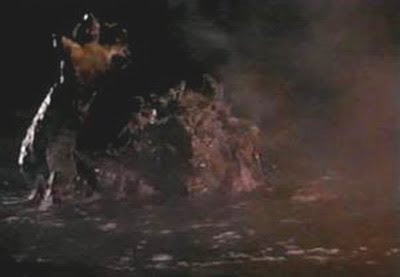 "Bachelor Party in the Bungalow of the Damned" review 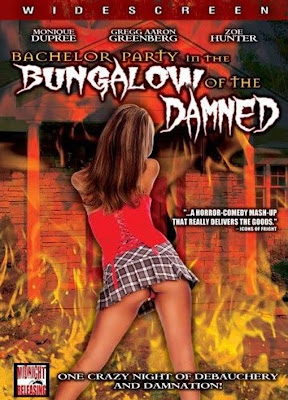 Bachelor Party in the Bungalow of the Damned

Director: Brian Thomson
Writer: Brian Thomson
Trina Analee ... Michelle
Monique Dupree ... Emerald
Gregg Aaron Greenberg ... Sammy
Kaitlyn Gutkes ... Vermillion
Rebecca Hodges ... The Reader
Zoe Hunter ... Snowy
Lloyd Kaufman
I was sent this DVD. A bunch of guys head out to the Hamptons to have a bachelor party. They decide to have their party at a geeky friend's bungalow. Unfortunately, it turns out to be a bungalow of the damned. Bummer. But this doesn't stop the festivities as three strippers/escorts/hookers for the damned show up to give the guys a show before dispatching them to hell. Tensions arise as this was not the bachelor party they were hoping for. Only the one level headed friend can come to grips with the situation and do battle with the damned escorts.
"Bachelor Party in the Bungalow of the Damned" is a bad movie. Are you shocked to hear that? The acting is bad, the special effects are a joke and the horror is non-existent. Although it is obvious that the filmmakers had no intention of making a serious horror movie, it still would be nice to believe I was actually watching a movie instead of a bunch of guys goofing off with a camcorder at their friend's house.
While "Bachelor Party in the Bungalow of the Damned" keeps moving along, it's not heading anywhere worth watching. A B-movie title of that magnitude should have delivered a fun movie with bachelors running for their lives from demonic women. Instead the entire party is laid to waste within minutes which only leaves one guy left to fight off the hooker horde. Then the movie wanders off into some other ridiculous storyline about past humiliations, vampire spawning and other topics that don't have anything to do with hookers massacring a bachelor party.
However, there was one pleasant element in "Bachelor Party in the Bungalow of the Damned" and I must praise her now. Monique Dupree shows up as one of the escorts from hell and unveils her very large demonic breasts. She knew how to get the party started. She is also the only thing I liked about this movie. Her presence in this movie shows how absolutely vital the B-movie babes are. This movie was heading for the landfill until she showed up. Sometimes the B-movie women are the only thing that makes these movies watchable. This was one of those times.

SCORE: 1.5 out of 4 Moniques for the B-movie damned 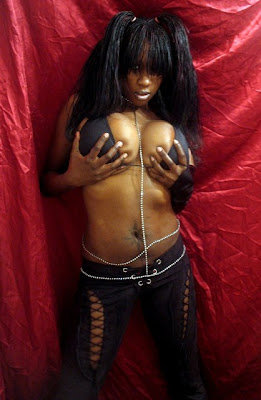 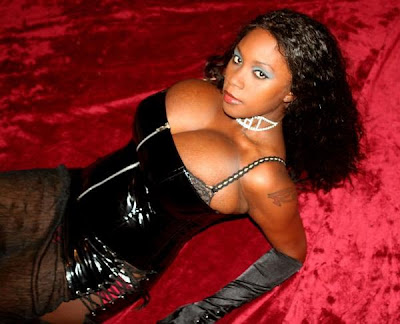 Nichole Hiltz ... Norma
Trace Adkins ... The Man
Priscilla Barnes ... Jean
Stefanie Black ... Tiffany
Jeanette Brox ... Bridget
Arielle Hakian ... Trailer park girl
Lindsay Johnston ... Nuclear Daughter
Michelle Lee ... Miss China
Hayley Marie Norman ... Amber
A trailer park is filled with despicable cretins who are trying to keep the one pretty girl in their midst from leaving. When they obnoxiously kill her fiance, she strikes a deal with a heavily armed guy to send the trailer park to hell. Flash forward a couple of years and a busload full of wayward youths strolls into town. Norma, (the pretty girl), asks them to stay the night so she can show them some southern zombie hospitality. You know, like some sweet tea, place to sleep, dismemberment, disembowelment, decapitation, etc.
"Trailer Park of Terror" starts off looking like it's going to be a lot of fun but then slowly devolves into the standard zombie flick. The complete destruction of the trailer park in the first fifteen minutes was a great way to start the movie. I was hoping this movie was going to go for something a little different. But then the standard horror movie victims got off the bus and made their way to their inevitably gory demise.
The redneck zombies all get a chance to have their gut munching turns with the delicious juvenile delinquents. There's the obese zombie who just wants her meat. Then you have a zombie who thinks he's Elvis and blasts his guitar from the rooftop. There are other southern (undead) stereotypes who manifest themselves and eat every wayward youth in sight.
But my favorite zombie let me down. There was a large breasted Asian masseuse zombie who specialized in happy endings. I was sure we were going to get a glimpse of her undead breasts but it was not to be. For some reason, she was a shy zombie and kept her robe on. For shame. Zombies should learn to let go of their pride and let their beautiful corpses rot away for all to see.
That's not to say the movie doesn't have some good gore moments. "Trailer Park of Terror" keeps a comedic tone as limbs are hacked off and devoured. There were some entertaining scenes as the zombies regularly clawed their way through the teens. But you get the feeling that you've seen this movie a few (hundred) times before and seen it done better.
"Trailer Park of Terror" is worth a look if you're in desperate need of some zombie thrills. If not, you can let this one go. 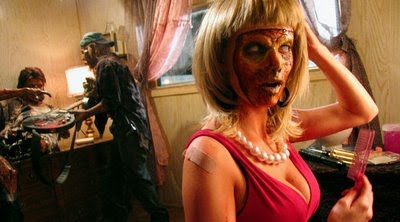