Dick Boland ... Dr. Zartan
Carmine Capobianco ... Coach Smith
Margaret Rose Champagne ... Scarlet
Robert Cosgrove Jr. ... The Chef
Sarah Dauber ... Mercedes
Dana Fay Ensalata ... Sam
Phil Hall ... Professor Shipwreck
Natalie Laspina ... Sharon
Sheri Lynn ... Lucy (as Sheri Toczko)
Natasha Nielsen ... Lonnie
Rachael Robbins ... Jenny
Debbie Rochon ... Mrs. Johnson
I was sent this DVD. I was slightly surprised that the filmmakers wanted to send me a copy of this sequel since I really didn't get into the first movie. I had watched the first "Bikini Bloodbath" while suffering through a near fatal bout of the flu. I drove to Vegas the next day with my friend and almost killed him too. I wrote about my near death experience in the review noting that I may not have been in the right frame of mind for a goofy slasher flick. The producer of "Bikini Bloodbath" was concerned about my health and wanted to see if I was well enough for round two with the bikini babes and their demented chef nemesis. Thankfully, the body and mind is now ready for more B-movie action.
But I since I was in and out of consciousness while watching the first bloodbath, I wanted to make sure I was completely lucid while watching this one. That's why I headed over to Burbank for a Chipotle rendezvous with my friends and had them pick up some whiskey and beer for a Bikini-movie night. We made our way back to their apartment where we met up with my friend's roommate and his big, black dog. After pouring some healthy shots of Jameson's, we settled in for the bloodbath at the car wash.
So Debbie Rochon is running a car wash. I thought she died in the first movie but I may have been hallucinating. The bikini girls work, scrub and basically jiggle around cars while loud metal music blasts on the soundtrack. Through a cheap series of events, the evil chef is resurrected and makes his way towards the babes of Rochon's wash. The ladies all head over to Debbie's pad for a car wash party where she yells and curses at them to shut up and get her more beer. The chef crashes the party and many bikini women will die horribly cheap deaths. 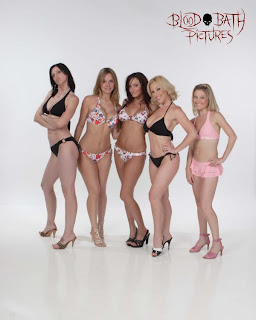 "Bikini Bloodbath Car Wash" is made by geeks for geeks. You know the geek factor is out of control when they name most of the roles in the movie after G.I. Joe characters. Even Cobra Commander makes a really annoying appearance to clue you in to the fact that you are watching the love child of Saturday morning cartoons and USA Up All Night movies. When I saw Debbie Rochon show up looking like the Baroness, I knew the movie was going to be a full tilt geeks on parade. 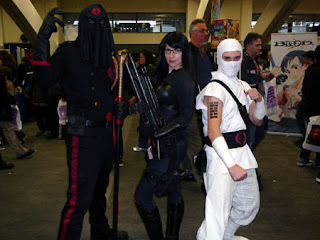 So in order to really watch "Bikini Bloodbath Car Wash", you have to be in the right frame of mind. We decided to play a drinking game where every topless bikini babe scene earns another chug of beer. Within ten seconds of the movie starting, I was chugging away. My friend's girlfriend played a similar game but she could only chug when the guy's took their shirts off. She did some chugging as well. There are plenty of scenes of bikini clad women jumping and dancing around and even the occasional topless scene to keep you awake. There are also a few gory spots where the chef puts his meat cleaver to good use and slices into some car wash women.

But I was disappointed that the car wash was not a bloodbath. None of the slasher scenes actually take place at the car wash. Not that I'm surprised that a B-movie has a deceptive title mind you but I was hoping for some blood spray on the clean cars. Although there is a knife fight at the car wash which is lifted right out of Michael Jackson's "Beat it" video. No bloodbath during this either but they did have some sweet dance moves.
"Bikini Bloodbath Car Wash" is not a horror movie nor is it an exploitation movie. It's a harmless geekfest that is best enjoyed with friends and beer. Make that lots of beer. My friends did get a kick out of the scene where Professor Shipwreck rolls around on the floor after getting hit in the nutsack. As for me, I'm could use less nut cracking scenes and more topless bikini women running for their lives scenes. Still, there's something about watching Debbie Rochon and friends do battle with yet another B-movie slasher that can make it worth checking out. Just make sure you have plenty of beer handy before pressing play. 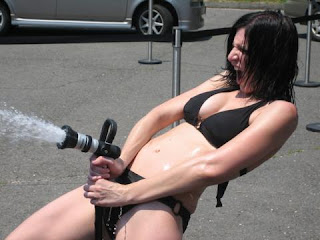 Yeah. . .
Being that I never saw the 1st one, I think that I will pass on both, unless of course they hit Cable one night, and there is nothing else on :-)

Thanks for the review!

I'm just glad I survived my battle with the flu so that I could live long enough to see the "Bikini" sequel. Wasn't sick during this movie but I was slightly inebriated.

the chick with the hose looks like jayna oso, (or maybe it was just her pose and facial expression at the moment the photo was taken).

I had to look up who Jayna Oso is and I'm glad I did. She does kind of look like her although I would say the firefighter is a little hotter than Oso. Girls and hoses. They can get excited.