"The Witches of Breastwick 2" review 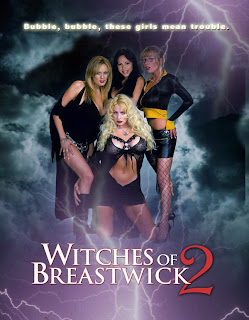 NOTE: To give you an idea how cheap this movie is, there isn't any cover art for it. The picture above is a fake poster that I stumbled upon. I know it's fake because not one babe, (including the beloved Julie Smith), is in the movie.

I saw this on cable the other night. I thought I might have a little time to go get a drink before the movie got going. I got up and turned my back on the movie for five seconds and the naked breasts had already popped out. You take your eyes off of "Witches of Breastwick 2" for a moment and topless women will be bouncing around. You've got to pay attention during these movies.
So a guy is having nightmares of large breasted women dancing around him. His esteemed therapist, Dr. I.M. Hornee, uses her highly unorthodox sexual hypnosis to see what the problem is. She prescribes a backpack full of Viagra and a hike out to Wynorski's favorite cabin in the woods to see if there are any naked women there. He strikes gold as three sex crazed witches are waiting for him and his wife. This leads to various love making rendezvous in hot tubs, bath tubs and anywhere else Wynorski wants to bark out orders to get laid.
After watching "Witches of Breastwick 2", I was hit with this incredible feeling of deja vu. It's as if I've seen this exact same movie before albeit with different performers. Not only can Wynorski not be bothered with such trivial details as a poster for the movie, he can't even take the time to dream up new sex scenes. He hit the snooze button on his creative mind years ago and yet I keep watching his movies. I think we know who the real fool is here.
The one thing that does change with his movies is the women who get naked at his command. I was slightly saddened that Julie Smith did not return from the first movie as she is the finest woman in B-movies today. Nikki Fritz would fall second on my list but Wynorski couldn't afford having her get naked so we had to settle for a 50 second cameo. Rebecca Love shows up as one of the horny witches and does a great job as always. The other witches were good too in their own sexually insatiable way.
But Wynorski and his lazy modus operandi sink this one. Every sex scene is a rehash from other softcore adventures he's filmed in his cherished mountain love shack. There is yet another scene in the hot tub where three women bounce around the water pretending to have a good time. Wynorski blasts music over every sex scene so he can yell direction at the ladies. It's almost eerie to see all three women look off screen at the same time at some unseen, all knowing horny puppet master. It jars you back to reality as you realize this was made as more of a home movie for his vast collection of girls on film than for anyone else to enjoy.
On the plus side, there are plenty of naked women to help you pass the time until you slip into a late night coma. The only good sex scene was with Taimie Hannum and the two witches in the bath tub. Taimie is great with other women and I enjoyed watching her lather up with the ladies. All of the guy/girl scenes in "Witches of Breastwick 2" are fairly ridiculous as Wynorski has them all humping away at turbo speed. He must have wanted to end quickly so he could get back to the sapphic action. I can't blame him for that.
So if you're up late one night and the Breastwick babes are on, it won't kill you to watch another round of Wynorski. That's not to say the movie is any good mind you but at the hour his movies come on the competition just can't stand up against the well stacked witches.
SCORE: 2 out of 4 witches of Wynorski 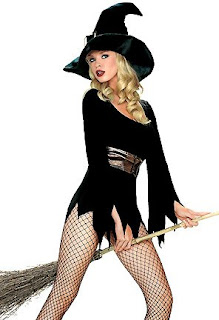 hahahahaha - I have never even heard of this one or the 1st one - too funny!

Nice Review - though since I do not have any Pay Channels, I will pass :-)

Caught this movie on Showtime. I agree Taimie Hannum is hot and I enjoyed her scenes.

It's good to see Taimie with a better role, but this is not a movie.