Tim Thomerson ... The Priest
Mark Hengst ... Benedict
Åsa Wallander ... Sydney
Ken Foree ... Max
Lee Perkins ... Officer Hicks
Cassie Courtland ... Hot Party Girl
Elissa Dowling ... Jerry the Bartender
Jenny Hendrix ... Naked Party Girl #1
Ann Marie ... Naked Party Girl #2
Marlie Moore ... Naked Door Girl
Kimberly Sanders ... Roxy
Tiffany Shepis ... Spider
Cherrae L. Stuart ... Cee
I was sent this DVD. Vampires are on the hunt for clean blood. Since human beings have been polluting their bodies with drugs, alcohol, fast food, etc, the blood supply has become tainted. Vampires are now forced to prey on each other or be on the lookout for other "pure bloods". A (very) wayward priest, (Tim Thomerson), is hunting a clique of vampires that are tearing their way across the country. The vampires are heading to Los Angeles to find a Blood Dealer that can supply them with the pure blood they desire. The priest, with his trusty samurai sword by his side, will try to finish them off before their bloodsucking lust consumes us all.
I usually end up trashing most movies that are sent to me. I was expecting more of the same with this movie. It was getting to the point where I wasn't sure why filmmakers even wanted to send me their movies in the first place. But I'm happy to tell you that I was entertained by this low budget vampire flick. "Live Evil" was a pleasant surprise. It's not often I get to say that so we must celebrate this exercise in B-movie madness.
"Live Evil" has all of the exploitation elements necessary to make an entertaining B-flick. It's got a vengeful priest, amoral vampires, naked women appearing at random intervals and plenty of blood to keep things moving along. Its only hampered by it's low budget. Some scenes needed some more money thrown at them to make them more effective. But then again, I suppose it wouldn't be a B-movie if it had the money. "Live Evil" did the best it could with what it had.
There are a couple of familiar B-movie faces who pop up during "Live Evil". When I heard that I was getting sent this movie, I told my friends that I had a Tiffany Shepis vampire flick heading my way. They were very excited. Unfortunately, this turned out to be false as Shepis is only in the movie for five minutes during a vampire party scene. I'm also sorry to report that there isn't any Shepis nudity but there are a few topless women roaming around the party. I also noticed that Elissa Dowling was in the movie as well. I almost didn't recognize her as she plays the bartender with a full beard (?). But when I saw the tattoo on her stomach I knew it was her. Ken Foree is the host of the party who brings all of the B-movie people together.
"Live Evil" is a fun and inventive vampire flick. There is plenty of blood, guts, and action to satisfy B-movie fans. I got a kick out of it. It's worth a look. 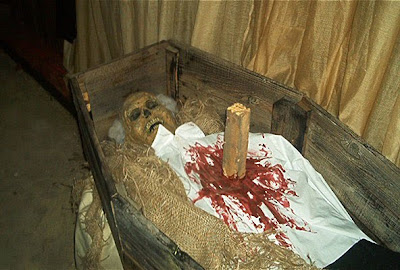 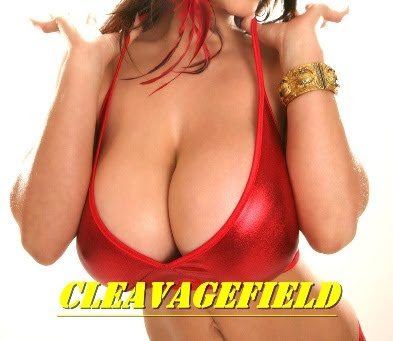 Brandee Schaefer
Amy Reid
Rebecca Love
Frankie Cullen
Lucia Santos
Julie K. Smith
Davina Murphy
Dallas Lowe
It's another late night romp through Wynorski's cleavage filled wonderland. This time we get a cut rate parody of "Cloverfield", cleverly titled "Cleavagefield". The movie starts off with a hot blonde having sex. She's unwinding before a party where she'll get naked again. Rebecca Love is already at the party having some bedroom fun with one of the girls. This is a good party. Then a monster shows up and ruins everything. The rest of the movie consists of the girls running around in heels, jiggling their way to freedom from cheap horny monsters.
"Cleavagefield" shows us once again Wynorski's obsession with filming the only thing that interests him in life: Topless women. Not sex, not anything kinky, just large breasted topless women. I can't even tell if he enjoys filming sex scenes. Every instance of coitus in this movie is filmed like they're either in a hurry to get it over with or is done so mechanically that the ladies are banging to the beat of Wynorksi's metronome. 1,2,3, bend your knees, 4,5,6, show me your [breasts].
It's clear at this point that Wynorski is just making home movies for himself. He has decided to bless us less fortunate late night viewers with a glimpse into his vast archive of topless adventures. Throughout "Cleavagefield", there are scenes of two blondes bouncing around Hawaii. These are supposed to be flashbacks that the main character is having while running away from the fattest monster in the world. But in reality they are flashbacks that Wynorski is having to his Hawaiian trip he took with these ladies. He has them vamp it up for his camera as they strip to please him. He also manages to coax a halfhearted sex scene out of them before losing interest. Once he's seen you pop the top a few dozen times, his mind starts to wander onto other breasts.
But there's one woman who doesn't stray far from Wynorski's mind, and that woman is Julie Smith. Everybody needs their muse and Miss JKS doesn't disappoint. Although I'm disappointed that she didn't show up in "Cleavagefield" until the very end of the movie. Wynorski should have known better than to hide his best babe away until the end.
Near the end of the movie, Rebecca Love shows up in Sgt. Julie Smith's laboratory to get checked out. Smith is a thorough doctor and must examine every inch of Ms Love's body. When Julie threw off her white lab coat to reveal a fish net body outfit, I knew "Cleavagefield" was about to take a very positive turn. Sure enough, Julie Smith's scene with Rebecca Love is the highlight of the movie. In fact, it's really the only scene worth watching although Rebecca Love's scene at the party wasn't too bad either.
So if you're up late one night and not sure what to do, "Cleavagefield" may be worth checking out. Certainly "Cleavagefield" is nothing more than another lazy excuse to show female breasts. But Wynorski is so committed to his particular infatuation that his love for heaving cleavage sometimes distracts you from the fact that he doesn't care about much else. Like plot, editing,coherency, etc.

SCORE: 2 out of 4 cleavage blessed Julies 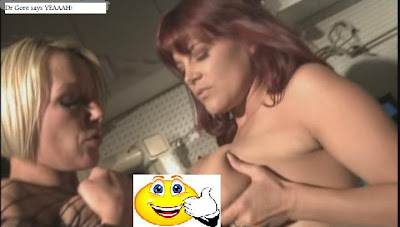