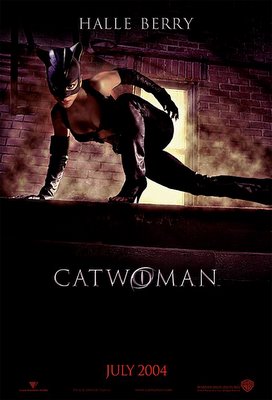 But I am afraid "Catwoman" fails as an action/superhero flick. It's as simple as this: A superhero needs a supervillain. Spiderman has Dr. Octopus. X-men have Magneto. Catwoman has...Sharon Stone? Middle aged cosmetics executive is not the first thing that pops into my mind when I think of a worthy adversary. "Catwoman" is aimless and pointless. It only finds its purpose when Berry is strutting her stuff. Strut, pout, work it out. And whip it. Whip it good.

So Halle Berry becomes Catwoman because...why? Because some cat eyeballed her and decided she'd make a good feline. Berry slowly realizes she's a Catwoman but has no idea what to do with her powers. So she prowls around town waiting for something interesting to happen. Soon she picks up a troublesome scent. This leads her to a cosmetics company and Sharon Stone, (Stoneface? hmmmm...), decides to skin the cat.

Halle Berry looks hot in a leather cat outfit. That's the only good thing about this movie. If you want to watch her slink around rooftops, see this movie. If that doesn't do it for you, it's probably best to skip this one. "Catwoman" doesn't have much, but it's got Halle Berry in leather. It may be enough.

SCORE: 2 out of 4 because the day she died was the day she started wearing hot leather outfits 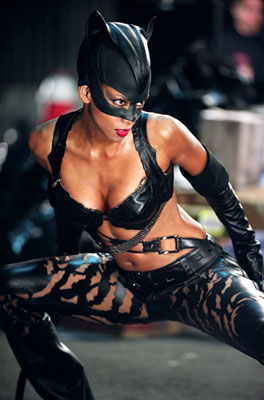