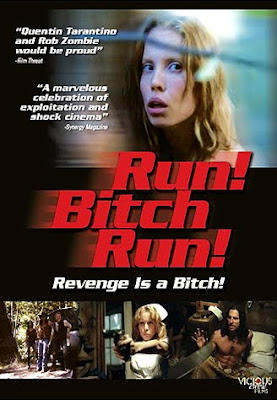 Christina DeRosa ... Rebecca
Cheryl Lyone ... Catherine
Peter Tahoe ... Lobo
Johnny Winscher ... Clint
Ivet Corvea ... Marla
Mike Tursi ... Abe
Chenoa Mason ... Holly
Liz Porter ... Starla
Lori Soleil ... Nurse Betty
Catholic schoolgirls are going door to door selling bibles in a sleazy exploitation movie. Their pleated skirts don't stand a chance of surviving. It doesn't take long before they knock on the door of a violent drug dealer and interrupt his tranquil Addams family existence. They disturbed him just as he was dispatching one of his hookers to an early grave. This would have ruined his whole day but when you're a depraved drug dealing pimp, you tend to come up with creative ways to amuse yourself. A true predator needs to catch his prey so he decides to let Catherine, (Cheryl Lyone), run for it so he can rape her when he pounces on her. This level of misogynistic brutality has an adverse effect on the nice Catholic girl and turns her into a mute assassin bent on revenge. Let the exploitation movie homages run baby run.
"Run! Bitch Run!" is a calculated, deliberate attempt to make a retro exploitation movie. There is a 70's sleaze vibe that permeates every frame of this movie. The spirit of Quentin Tarantino hangs heavy over "Run! Bitch Run!". For that matter, the ghosts of exploitation movies past must have paid the director a visit in his dreams and told him to make this movie. "I Spit on Your Grave" and "They Call her One Eye" are two other "rape and revenge" flicks that will spring to your mind while watching Catherine get her revenge after she gets raped.
But when you hear "Grindhouse" music playing over most of the action scenes, you'll know that this movie was meant as a calling card for the filmmakers so that they could show their love for Tarantino, Rob Zombie and anyone else out there who has a fetish for 70's exploitation. "Run! Bitch Run!" feels like it was made to make the case that it should fill a slot in a possible "Grindhouse" sequel. I'm all for sleazy movies but we don't need to keep reaching back to the 70's to show us the way to exploit blood, sex and ultra violence. We've learned a lot from that golden age of exploitation but it's time to move on.
But since "Run! Bitch Run!" is overflowing with naked women, sordid violence and general miscreancy, I can forgive most of its flaws. Cheryl Lyone does a good job as the nice girl, (in a Catholic schoolgirl uniform with her hair in a bun selling bibles) who flips out into a cold blooded killer, (in a nurses uniform with her hair down selling death with a pump shotgun). Ivet Corvea is the crazed hooker who carries a lot of the exploitation scenes. I must also praise Ivet and her drug dealing girlfriend for their great make out scene. I was praying that the filmmakers wouldn't neglect the sheer beauty of watching two pretty girls kiss each other and they didn't let me down. There are a lot of other women who take the time to get into the swing of things and take their tops off as well.
So if you've seen all of the 70's "rape and revenge" flicks and need another fix, "Run! Bitch Run!" is worth a look. The filmmakers have done their homework and execute the 70's sleaze playbook step by step to make sure you get your fill of exploitation madness.
SCORE: 3 out of 4 nasty nurses - They call her Catherine 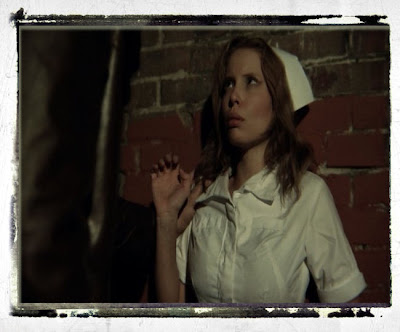 She looks very sexy in that picture, i`d love to undo the buttons on her nurses uniform.

Dr. gore, my apologies for the ludicrous tameness of my last comment regarding this film, it was written in relative haste. Now heres what i really meant to say, i desperately want to bugger that gorgeous chick senseless and then unload half a pint of spunk down her lushious young throat, however i would not fuck her, thats for her husband to do on her wedding night.

That sounds more like you. But would your buggering turn her into a mute assassin bent on murderous revenge? You have to think about these things before getting involved with bloodlusting women.

Admittedly it is better to bugger a bird who is totally submissive, compliant and appreciative (as Ronny Cox said to Rachel Ticotin in "Total Recall" (1990), still a great movie) but if shoving my knob up her arse did turn her into a mute assassin bent on murderous revenge then so be it, after all my ultimate obsession is to bum-off every gorgeous 18 year-old bird on the planet irrespective of the consequences. Never forget 18 year-old girls arse-holes are the holy grail of sexual activity (much more so than the quim) and should always be worshipped and buggered as such.

Can you please tell me how many brunets show there boobs in this moive?

But much more importantly how many brunets (and blondes and redheads) with massive knockers are actually seen being graphically buggered in this movie? (preferably in POV).

always the one with the interesting questions white wolf. Those questions are the sole reason dr gore still reviews movies.
Thank you for asking, just wonderful.

Okay. can someone tell me the anwser now please?

Hey "unrealbe", "the sneering (homo-phobic) snobs" comment was 100 times more interesting and relevant than "The White Wolfs", heterosexual buggery represents the future for everyone on the planet (thankfully).

You guys sure do have weird names. lol. But if theres one thing I know its that buggery is what goes down in Prisons.

As far as topless brunettes in "Run! Bitch Run!", there are a couple. Catherine's friend gets topless and there are a few other random topless women but I can't remember if they are brunettes.

But this gives me another chance to talk about the mute assassin Catherine, (Cheryl Lyone). She has a great, get back to nature scene where she walks around the forest naked. It was one of the highlights of the movie. There are no fake breasts in this movie and Lyone's were the most pleasant natural beauties to behold. Not a brunette I know but still very good.

As unrealbe implies, this gets to the heart of the appeal of exploitation movies. Show me the breasts! The producers of this film explicitly understood this and I appreciated it.

Thank you doctor. I will take your medecine with a tall glass of water.

I cannot beleive how ludicrously out-moded, naive and absurd "The White Wolfs" comment was, also i am "THE SNEERING (HOMO-PHOBIC) SNOB" (in all my rampagingly heterosexual glory, as it were) so i do NOT repeat NOT want to hear anything about bloody woofters on woofters O.K!!!. Now lets move on to something much more pleasant, namely that fabulous image of the lushious Cheryl Lyone totally naked in the forest, i was just wondering if at any time the gorgeous sexpot bent over and pulled her bum open so we could see her lushious young arse-hole? if the incredible bird did do that i will definitely go out of my way to see this movie because even though there are millions of such images available on the internet (which i`m looking at 20 hours a day obviously) i think you`ll agree its always extra special to see a gorgeous bird pull her bum open and show her arse-hole in what is essentially a exploitation/horror movie because for me seeing a birds arse-hole is much more important than seeing her tits or twat (although ideally they should always be in full veiw as well obviously). Only an idiot wastes his time fucking a bird when he could be buggering her instead, never forget that Dr. Gore, NEVER!!!.

I SHOULD HAVE BEEN IN THIS..!