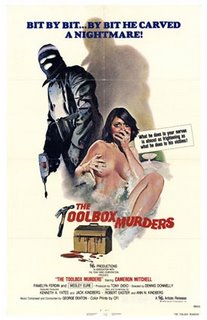 The highlight of the film involves a woman taking a bubble bath. The killer waits patiently by the bathroom door as she rubs herself raw underneath the bubbles.

After she's done pleasuring herself, he chases her around the apartment with a nailgun. He "nails" her a couple of times and then lovingly puts the final nail through her head.

This was one of the greatest scenes in exploitation movie history. Watch this movie just for that scene. The rest of the movie will only hurt you.

SCORE: 2 out of 4 for power tool massacres

this is not the only movie to contain nail gun related homicide. check out "nail gun massacre". the title says it all.

the only thing i ever get exited about with regards to this movie is knowing that when it was filmed towards the end of 1977 pamelyn ferdin was 18 years old at the absolute peak of her physical attractiveness and desirability, again she`s one of those birds who isn`t exactly an obvious babe but she`s always driven me wild with lust and desire, (actually she still does now, even at the age of 49), i`d love to find myself in bed with her and linda blair, and that brings me to a question, do you think she would have made a better regan mcneil than linda, (i personally dont think so, but what`s your opinion).

I'd have to go with Linda Blair on that one. Blair did a great job as a demon's plaything. Although your idea of putting Pamelyn and Linda in bed together is intriguing. That would match with my idea of putting Kristy McNichol and Princess Leia in bed together. Of course for me, Carrie Fisher would have to have the cinnammon bun hairstyle for it to work. And she would have to wear the white Princess dress. And she'd have to say she likes me "when I'm not acting like a scoundrel." A perfect night awaits.

dr. gore, i`ve always been crackers about kristy mcnichol and carrie fisher as well, i think the best time to have been in bed with both of them would have been 1980 when kristy was 18 and carrie was 24, i would then procede to bugger both of them senseless for hours, (and rub their clits red raw). When they were at their peak both those birds had arses that were the stuff of legend.