"Once Upon a Time in Mexico" review 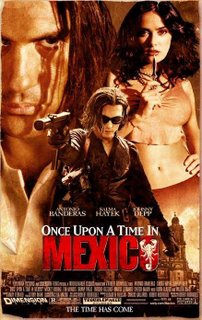 In the beginning of the movie, as the credits were rolling by, one particular credit caught my attention. It was a "Chopped" credit for Robert Rodriguez. It may have been the most truthful credit ever given in the history of motion pictures. "Once Upon a Time in Mexico" was hacked and slashed harder than Freddy's and Jason's bodies in "Freddy vs. Jason". A string of cameos were filmed, cut to ribbons and then super glued back together to make a rough facsimile of a movie. Fortunately, the violence level is high which saves "Once Upon a Time in Mexico" from the trash heap.

All of the actors seemed to have filmed their scenes separately. Dafoe pops in and out. Depp keeps eating pork for some reason. Salma Hayek is barely in this movie although she is prominently displayed on the poster. The Desperado himself (Banderas) shows up sporadically. Depp is still eating pork. The actors must have been filmed together for a day or two just so they could try to give the movie some coherence. This flick barely holds together.

The good news is that the violence is as hyper and as stylized as the first "Desperado". That's the only good news. This was the first movie that I have ever seen with a "Chopped" credit. The filmmakers seem to have taken a perverse glee in how quickly they can throw a movie together. Perhaps they should have taken a closer look at what they were throwing into the movie blender. Once upon a time there was a thing known as Quality Control. Now it's just "Chopped".

SCORE: 1.5 out of 4 Depps eating lots of chopped pork 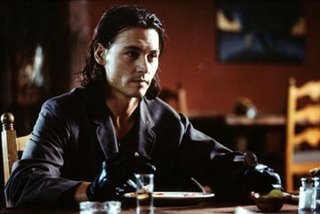