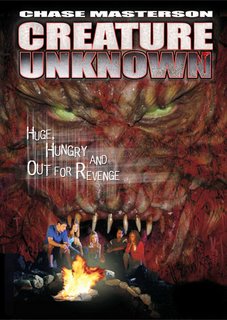 The key to a successful monster movie is to have a monster. Sounds obvious doesn't it? You'd be surprised how many B-movie filmmakers put a monster on their video box cover and then neglect to have an actual monster in the movie. "Creature Unknown" delivers the goods. Monster attacks dolts and there is much rejoicing.

A bunch of friends have a reunion at a cabin in the woods. How these people could possibly be friends is beyond me. I can't see many Goth girls hanging out with jock types. But what the heck right? Let's get all the stereotypes together so they can be slaughtered in harmony. They are there to remember one of their slain comrades. The dead guy's twin brother wants to have a cathartic group experience. A hyper, jumping monster shows up to spoil the fun. Could this unknown creature be the reason for their friend's death? Hmmmmm...

I enjoyed "Creature Unknown". There was a monster on the video box cover and a monster appeared in the movie. Eureka. He ripped apart people with much joy. My kind of beast. It doesn't take much to make me happy. I was satisfied.

SCORE: 2.5 out of 4 hyper freefalling creatures 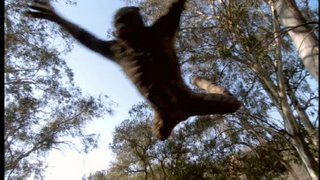