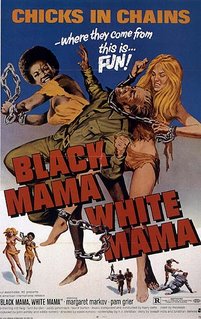 Speaking as an exploitation movie fan, I have one major complaint about this film: The complete and utter lack of lesbian sex. Women in chains movies should have lesbians. It's in the contract. Black mama and white mama did not get it on. And they were chained together through most of the movie! What a great scene that would have been. Black mama even rejected the lesbian advances of the prison warden. I was dismayed.

Everything starts off good with white and black mama meeting at an island prison and lots of nakedness happening.

Then the movie switches gears, dumps the prison scene for a long winded chase through the jungle with the two mamas chained together. Everyone keeps their clothes on except for the occasional topless hooker.

So potential interracial prison sex turns into routine B jungle action movie. Not the turn I was hoping for. It's a fair action movie I guess. I've seen worse. But man have I seen better.