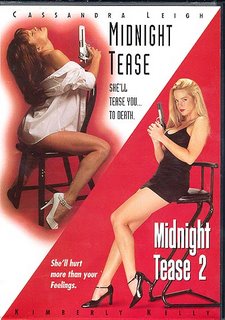 Once again, I must praise Julie Smith for being such a super hot babe. She's looking mighty fine in this one. She has about three stripping scenes and they are all hot. 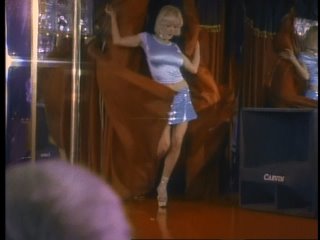 Kimberly Kelly is the star of the show and she makes the most of it. She has two lap dance scenes, ("I've never done a lap dance before…"), and two stage stripping scenes. She's got it going on. 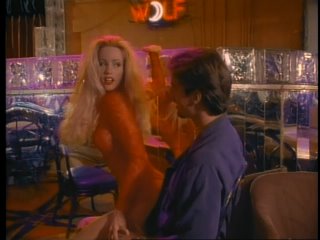 She's not quite hanging in Smith's league but she's up there.

So once again some story about murdered strippers plays out as the girls bump and grind on stage. This time the girls are being suffocated by some madman. Who is the murderer and does anybody really care? Of course no one cares. But since you can't really have a stripper movie without some sort of "plot", you'll have to make the most of it. You'd think it would be enough just to watch a movie about a couple of days in the lives of strippers. Well, it'd be enough for me. Especially if one of the strippers is named Julie Smith.

SCORE: 3 out of 4 unstoppable Julie Smiths 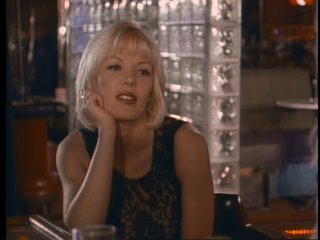 This was the very first movie I ever worked on. I've written about my wonderful experiences with Julie Smith on set elsewhere, but allow me to repeat, amongst my job duties was driving her home from set. Kimberly Kelly was obscenely hot. I had first met her months before on the set on Wynorski's Hard Bounty (with Kelly LeBrock) in Old Tuscon. Richard Styles was a trip. Nice guy, but did not assert himself fully on the first day and paid the price. I learned from this. A director has to lead. If you lead, they follow. Styles didn't and Gary Graver picked up a lot of the slack, in terms of just grabbing the camera and making the shots that were needed. Gary's gone now and I miss him; a really great guy with so much knowledge. It was he who taught me about lenses. This was a ten day shoot, with the first four or five at Crazy Girls on La Brea. Four or five days of shooting stripping and lapdances. I can be seen in the background of several shots. We shot this back to back with Vice Girls. I'm in that one too-- I actually have dialogue in that one.

I will have to watch this one again to see if I can find you. It'll be challenging because my eyes will instinctively roam toward Julie Smith.

Bit what a great way to get started in the movie world. Four or five days watching Julie Smith strip and do lap dances sounds like the greatest introduction to movies one could hope for. Where did she live at the time that you had to drive her from Crazy Girls? I'm just wondering how long a drive you had with her, i.e. "alone time". Did she warm up to you right away or was it a Driving Miss Daisy type situation for awhile? Never seen "Vice Girls" but I will try to see if I can rent it.

I told you previously about how she would wake me when I napped on set: with her boobs in my face or her crunching a craft services carrot stick in my ear. And I told you about her needing help with her garters. I was young, and I was one of the few guys not constantly hitting on her, maybe she liked that. Plus I wrote profiles of actresses for magazines. Either way she was great fun. She lived on Hayworth Avenue, north of Melrose. Not that long a drive, but she did invite me in. Like I said, she was an awesome girl. A no bullshit kind of person with an excellent intellect and a wry sense of humor. And her daughter was the most beautiful little girl I've ever seen. One shot I know I'm in is where a customer is getting a table dance from this brunette. I can be seen in a booth behind him, talking to the brother of one of the producers. I didn't even know they were rolling. That place was full of mirrors. Shooting there was a nightmare for Gary. The crew would often have to sit on the floor or duck behind something in order to not be seen in the shot. A lot of folks are in shots inadvertantly. When we wrapped there, Gary said he was going to take down all the mirrors in his house for a while. Jim Wynorski has a cameo as a customer. BTW, I also provided thr guns that Ross Hagen and Hoke Howell use in the picture. You'll note that, as we had no blanks, they used a flash frame for the scene where Tane gets shot. Vice Girls starred Lana Clarkson. I used to pick her up at her house and drive her to set as well. Concorde/New Horizons put it out on video years later. They had picked it up and then forgotten about it. I'll save my anecdotes for your review.

Ahh, Julie Smith boobs in the face. You're a lucky man. I was hoping she was a cool person. Sounds like you had a good time being the Smith chauffeur.

Finding "Vice Girls" will not be easy. New Horizons forgot about it and so did my local Blockbuster. I may have to dig deep for this one.

AW...YOU ARE CORRECT SIR...THIS WAS FILMED @ THE INFAMOUS 'CRAZY GIRLS'!