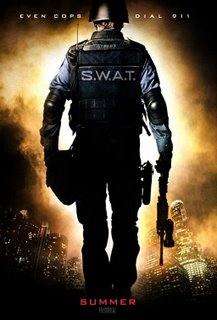 "S.W.A.T." is an action movie cut in two halves. The first half is the story of a S.W.A.T. team being put together by Samuel Jackson. The second they are all together, the movie shifts gears into non-stop action. A big time drug dealer looks at the TV news cameras and tells anyone listening he'll pay them "100 MILLLLLION DOLLARS!" if they free him. Now the fun begins. The second half is a B-action movie with A-movie money.

"S.W.A.T." is a decent action flick. The first half felt like a long commercial for the soundtrack. Every training scene was a good excuse to let the hard rock blast away. So we get to meet all the team players and hopefully care about them when their lives are in danger.

One last thought, why did the filmmakers make a big deal about the woman of the team, (Michelle Rodriguez)?

The other cops make the usual remarks about a woman not being able to handle S.W.A.T. action. We first see her after she has beaten up some guy. So I was expecting a scene where she gets to prove how tough she was. Where was the Girlfight? I don't remember her having any action scenes. The only action I saw was her punching a punching bag. Wow. That's tough enough for S.W.A.T. Case closed. Glad we settled that. Yeeeaaaahh. 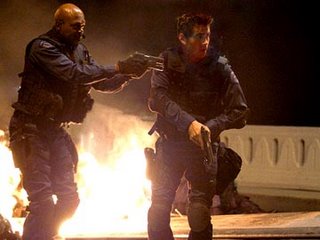