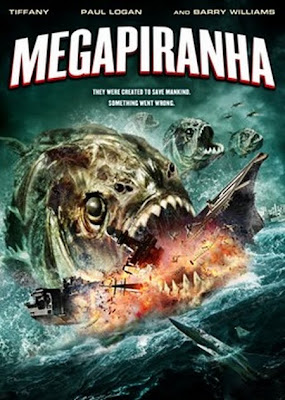 Paul Logan ... Jason Fitch
Tiffany ... Sarah Monroe
Barry Williams ... Bob Grady
David Labiosa ... Colonel Antonio Diaz
Jude Gerard Prest ... Dr. Brian Higgins
Jesse Daly ... Dr. Eli Gordon
Cooper Harris ... Lt. Julia
William Morse ... Lt. Stritch
Mega Piranha are on the loose and only an 80's pop star can save the world. Tiffany is the resident super genius, (or is that mega genius?), who knows everything there is to know about Mega Piranha. A hunky special forces soldier has come to the Amazon to figure out why the American Ambassador was torn into a million pieces. Tiffany holds all the answers as they try to get away, into the night, and then he puts his arms around her and they tumble to the ground and then he says, "I think we're alone now." But they're not! Mega Piranha keep eating everything in sight and keep growing and growing until they've reached the size of Super Pac-man. Trying to figure out how to defeat a mega Piranha is like trying to solve a Rubik's Cube. Somebody call the A-Team! Stop me before I run out of 80's references!

It's going to be very hard to describe "Mega Piranha" without using the word cheesy. Cheesy is the word the captures the acting, special effects, mood, story and everything else associated with this movie. "Mega Piranha" is shot as a hyperactive action movie with ridiculous piranha inhaling every object, (living or otherwise), that gets in their way. I suppose the filmmakers deserve a little credit for trying to take this subject matter seriously. But whether they take it seriously or not, "Mega Piranha" is still a cheesy B-movie that was made to be forgotten.

There are two scenes in "Mega Piranha" that are worth mentioning so that you don't have to actually watch this movie. They both involve piranha flying out of the water. The first one has the soldier swimming out of a river full of piranha. As he sits on the beach, a mega piranha jumps out of the water and howls at him as he leaps for his throat. This ends in a mano-a-teeth battle to the death. The second scene has the same soldier on a different beach. This time the piranha show that they have learned their lesson from the first battle and attack in waves. Fortunately the soldier is trained for just such a situation and uses his feet to kick them back in the water. These two scenes highlight the total entertainment value of this movie.

The rest of "Mega Piranha" is a headache-inducing, cheeseball action movie. Unless you're dying for piranha mega cheese, this one can be skipped. The only thing else worth mentioning is the presence of Tiffany. There's something important about Tiffany that needs to be said: Tiffany has an amazing rack. Yes, it's true. It's also true that "Mega Piranha" did not exploit this 80's pop star as much as it should have. I don't believe she ever said "I think we're alone now". I was waiting for it but I'm pretty sure she never said any lines from her hot cover song. What a shame. The beating of her heart was the only sound... 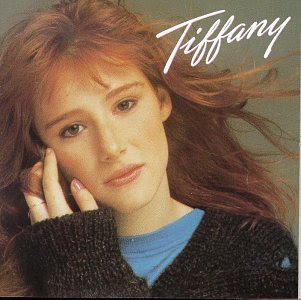 Tiffany in all her glory:

I know people love to trash the Asylum's movies but any one them chosen completely at random would still be...er...well you know the rest.

Whatever you thought about this movie; the Asylum's more recent "Megapython vs Gatoroid" starring Tiffany and fellow 80's popster Debbie Gibson is even more so!

And here I thought I was being too subtle....

Anonymous, no amount of subtlety could ever hide or disguise the fact that the British film industry is a bloody load of old rubbish.

Well, I wouldn't be THAT harsh. I would refer you to Jake West's recent "Doghouse" or especially "Evil Aliens"; and then there's Neil Marshall ("Dog Soldiers", "The Descent"). So there's hope, even if they can't come up with a "Megapiranha".

Oh, as to your comment about buggering Ms. Gibson and Tiffany when they where 18, but not now:
I'll withhold judgement on that, but I'd motorboat Tiffany right this second. Vrooom!

I'd motorboat Tiffany and Debbie Gibson. And throw in Madonna and Belinda Carlisle as well. And Debbie Harry circa "Videodrome" while you're at it.

It's a lot of motorboating but when mega piranhas are attacking, you need to make every remaining second of life count.

Anonymous, the point i`m making is that with regards to the films that you girl-tioned, they would have all been 100 times better if they`d been American made instead of British. The British simply dont know how to make films, thats a well known fact. Dr. Gore, just something with regards to Debbie Harry and the other middle aged slags you girl-tioned, when i first saw the bird in 1978 i thought she was one of the most stunningly gorgeous birds i`d ever seen but then i found out she was 33 years old, a full 15 years past her prime already, i felt like i`d been really conned. I thought i`d just girl-tion that to put things into the proper perspective again.

Man, in an piranha emergency, I might have to skip Debbie Gibson. Kinda shallow waters...

Hey Anonymous, if we`re talking about the 18 year-old version of Debbie Gibson here (circa 1988) there would never be a good reason to "skip" the bird believe me. Instead you should perform every sex-act in the known universe on the bird, as you should on every 18 year-old bird that you ever encounter OK.

JBH, I was was referring to the 2011 version of Debbie Gibson, certainly not the 18 year old version. I absolutely agree with you about the necessity of performing every sex act known to mankind (and perhaps inventing a couple more) upon all of the 18 year old birds. Particularly in a piranha emergency!