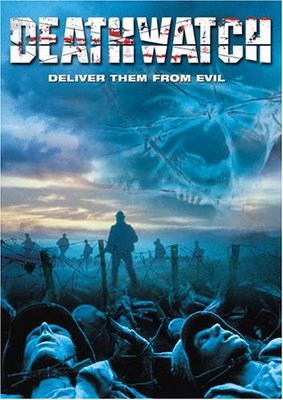 Rain and mud. These are the two things "Deathwatch" does well. Boy, did it rain a lot. Man, was that trench muddy. I recently watched "The Bunker" which was very similar to "Deathwatch" with the exception of two things. Can you guess what those two things are?

"Deathwatch" has a bunch of British soldiers hanging out in a very wet and muddy trench. World War I is raging all around them and a mud filled trench is better than the battlefield. Soon the soldiers will realize that there is an unknown enemy in their midst. Or maybe it's all in their minds. Maybe the never-ending rain has clogged their brains. Only the bravest and driest soldiers will make it out of the mud.

War/horror movies don't work. There is more than enough horror in war. You don't need to throw in any supernatural elements. I was more scared of the soldier with the spiked club than I was of anything the evil muddy trench had to spit out at them. While "Deathwatch" is a better "Stranded soldiers going insane" flick than "The Bunker", I would still pass on both of them. There's not much here for either a war or a horror movie fan. However, if you like seeing soldiers scream and yell in a muddy trench, rent "Deathwatch" immediately. 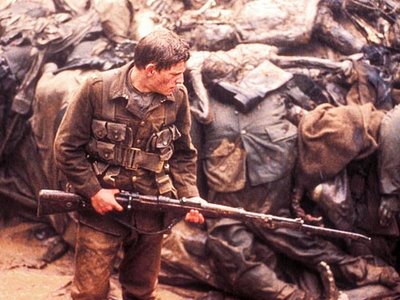 Quote: "There is more than enough horror in war. You don't need to throw in any supernatural elements. I was more scared of the soldier with the spiked club than I was of anything the evil muddy trench had to spit out at them."

Congratulations my friemd - you completly missed the point.

I would love to mud wrestle with any of these hot, sweaty, manly men! OH! I have a boner!!!!

you call that a review?

This was British made so obviously its gonna` be garbage by definition ! ! !.

First off I loved the movie the rain amd the regular psychological effects of war are heavy enough without oppresive fog and a supernatural entity. Plus being a brit the rain isnt too much of a bother. I found the movie was like a mild curry. Just enough scares to keep you on the edge but enough story for you to follow. Also to the idiot who insulted british films id like to refer to all the james bond movies the cornetto trilogy and the harry potter movies all of which have good reviews and praise all of which are british made

I completely agree with Anonymous Number One: you completely missed the point. I also agree with Number Three who asked if you call that a review.

In the first place you attacked precisely what makes the film work: the rain and mud, which anyone who knows anything about the conditions of trench warfare in 1917 could've told you was completely authentic and very well done. If the remakethey're now planning of All Quiet On The Western Front does as good a job of the set design I'll be grateful. Secondly, you missed the clear fact that this isn't a war film at all. It's a horror film set against the backdrop of war, and is as much a war film as a slasher flick in a hotel is a film about the hospitality industry.

What you also missed totally were the many actual *flaws* in the film, especially the heavy handed religious symbolism. From crucifixion to the sole "survivor" rising into the light while the others crouch underground in the dark around a fire, how much more explicit could it get? And yet you didn't think that fit to mention?

This isn't a review. It isn't even a hack job. Did you even watch to the end?