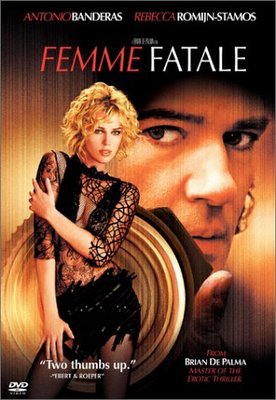 I was in a hotel room the other day when I decided to see what was on cable. I love hotel rooms. There is nothing else to do but plop yourself down and relax. I decided that whatever movie was on next, I was going to watch. The next flick was "Femme Fatale". I stretched myself out on the bed and turned it on.

Brian De Palma and I have two things in common: 1) We both like seeing women in Jack Boots. One mysterious woman wears an army outfit with camouflage Jack Boots, (boots that go all the way up and over the knee). She had on ultra short shorts and army dominatrix boots. It was sweet. She was sweet. Sweeeet. The second thing we have in common is a desire to watch beautiful women make out in bathrooms. In the first fifteen minutes, Rebecca Romijn has got a half naked woman pinned against a stall door. YEEAAAHH!! That's how you start a movie.

The rest of "Femme Fatale" is a mixed bag. Rebecca Romijn is a pleasant sight when she's making use of her assets, namely her long, long, and I mean loooong legs. Any scene with her acting scared, confused or sad was eating away at valuable sex bomb time. Rebecca is on the run and dodging her past. Will her past come back to haunt her? Kill her? Confuse her? Does she have a past? Who is she? What the heck is going on here?

"Femme Fatale" is not all that it seems. Even if you think you've got it all figured out, the movie will throw you a hard curve ball near the end. Whether or not you enjoy this movie will depend entirely on how much you enjoy being screwed with. If I saw this movie in a theater, I would have felt cheated. But since I was vegetating in a hotel room, "Femme Fatale" was all right by me. If nothing else, I got to see two mega babes making out in a Paris bathroom. You don't see that every day. I slept very well that night. 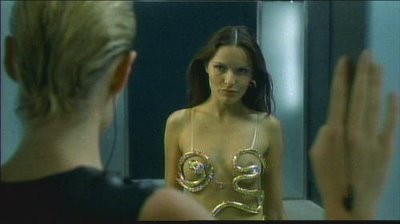