I saw "Torque" in a near deserted movie theater. It was me in the second row and two 13 or 14 year old guys in the back row. We were the target audience. "Torque" hit a bullseye for us. So if you're not a teenage boy or a B-movie lunatic, avoid "Torque". If you fit into the profile audience for an insane biker flick, see this movie immediately.

"Torque" is hilarious. I was cheering through the whole thing. It wasn't just the stunts that had me going. It was the dialogue as well. When the main biker tries to make up with his girlfriend who he ditched he says, "I wrote letters." She says, "I made fires." I just had a laughing fit writing that.

Ice Cube shows up as the angriest biker in the world. He has a permanent scowl on his face. Just looking at him had me laughing. All the macho elements of a biker flick are on proud display. The hard rock was cranked up as the bikers did battle. There was Kid Rock and Static-X. It was a hard rock party. I had a good time.

Speaking of Static-X, the last scene with super hot Jaime Pressly has "Push it" blasting away as she does battle with the main blonde biker. Ah Jaime. What a special effect you are. Good Lord, she can squeeze into a pair of leather pants. Gotta love it.

SCORE: 3 out of 4 Presslys in leather 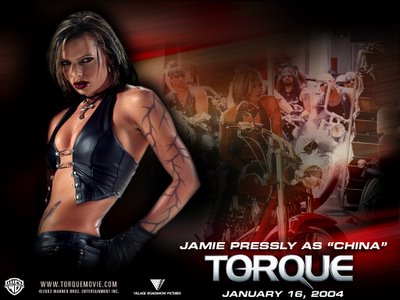