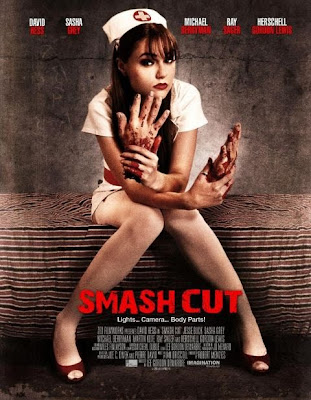 Smash Cut (2009)
Director: Lee Demarbre
Writer: Ian Driscoll
David Hess ... Able Whitman
Jesse Buck ... Isaac Beaumonde
Michael Berryman ... Philip Farmsworth Jr.
Ray Sager ... Reverend Ezekial Boone
Sasha Grey ... April Carson
Jennilee Murray ... Georgina Carson / Gigi Spot
A bad movie review drives a director insane. Able Whitman's, (David Hess), soul needs inspiration so he can start making horror movies that people actually want to watch. He runs into the warm embrace of his stripper muse looking for something inspiring in her lap dance. After a horrific car accident, her mangled corpse provides the spark he needs to start making blood soaked horror again. His movies needed to be more realistic in their portrayal of murder and mayhem. He decides that the only way to get the shots he needs is to kill everyone who has hurt him. Unfortunately it turns out that everyone he knows has hurt him. It won't be long before they all feel the homicidal wrath of an angry B-movie director.
There are a lot of exploitation icons in "Smash Cut". David Hess, Michael Berryman and Herschell Gordon Lewis all make appearances. David Hess is the frustrated director on a homicide binge. Berryman is the nervous studio head and Lewis shows up as intrepid reporter Sasha Grey's boss. The filmmakers wanted to show their love for the exploitation arts so they invited some notorious characters into their movie. While seeing horror and exploitation icons jump back into B-movies can be fun, their appearance in "Smash Cut" feels like the sole reason this movie exists.
I thought "Smash Cut" was going to be vehicle for Sasha Grey to strut her stuff in a horror flick but it turns out the filmmakers are more in love with David Hess. Now I liked Hess in "House on the Edge of the Park" and in other nasty horror flicks but I think the filmmakers priorities are a little skewed. Sasha should have taken center stage here. Haven't watching all of these exploitation movies taught us anything? Women are always the stars of these movies. They scream the best, run from maniacs the fastest and look good taking long showers to wash the blood off of their bodies. David Hess has some fine qualities but not nearly as fine as Sasha Grey.
Sasha Grey is an interesting character. If you've read anything about her, it becomes apparent how deadly serious she takes being a porn star. Rough sex is the brand she's selling and she does it very well. But the filmmakers fail to capitalize on her nasty reputation because they're too busy fawning over their exploitation idols. Sasha runs around the film set trying to find out what happened to her missing family member. It turns out Hess is using her dead relative for props in his movie. While this clearly should have led to a scene where Hess has rough sex with Sasha, (to get her to confess her deceitful sins), the filmmakers decided to let Sasha stay pure and not engage in any sort of carnal activity. For shame.
So without any Sasha Grey sex scenes, (or even nudity!), what else is there? "Smash Cut" is a collection of cheap gore scenes as Hess runs wild over every person he's ever met. Every gore scene is played for laughs as Hess uses a variety of instruments of death to get the job done. A knife, a nail gun, and even a harpoon is used to spill the guts of his enemies. While the blood is plentiful, the effects are too cheap and shoddy to be anywhere close to shocking. Even an eye-gouging scene can't horrify as it's clear that some poor doll is getting its fake eye mangled.
"Smash Cut" has some fun scenes as Hess laments the state of low budget filmmaking by morosely slaughtering his enemies. But it wasn't quite the exploitation movie it could have been. Sasha Grey is featured on the DVD cover and could have shouldered more of the exploitation burden. If the filmmakers would have let her explore her dark side, "Smash Cut" could have been so much more than the standard B-movie it is. You must never let a porn star go to waste. Any exploitation fan should know that.
SCORE: 2.5 out of 4 intrepid Sashas 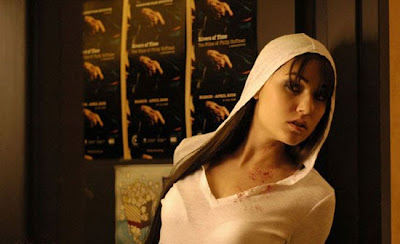 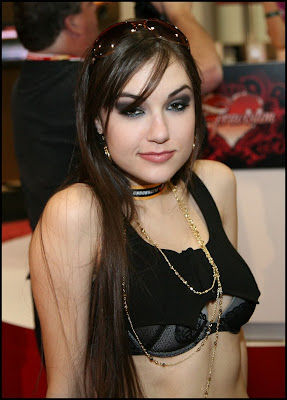 So I finally got to the address after managing to drive by it twice. The shooting location was in a completely nondescript brick building. The kind of building that you would pass a hundred times and never notice. In other words, a perfect location. There won't be any surprise visitors showing up here.

Actually there was a surprise visitor at the shoot and it was me. I walked in the front door and was stared at like I was from outer space. But Mr. Whiteacre's friend Joanne recognized me and said that he was filming. The red light was flashing which could only mean that PSA's were rolling. 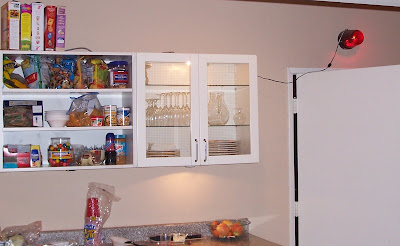 There wasn't any cocaine in sight but there was a lovely vegetable tray. The carrots were delicious.

Now I'm going to refrain from commenting on the individual PSA's as far as who did better than others. Although I have to say Ron Jeremy pretty much nailed it. He reminded me of that scene in "The Simpsons" where Krusty the clown bursts into the recording studio to do voice-over work, gets it in one take and then takes off immediately saying "Learn from a professional kid." Mr. Whiteacre was working like a madman to keep everything on track. I never saw him sit down nor did I see anyone take any breaks. From 6:00PM until 12:15AM, it was non-stop filming of porno PSA's. 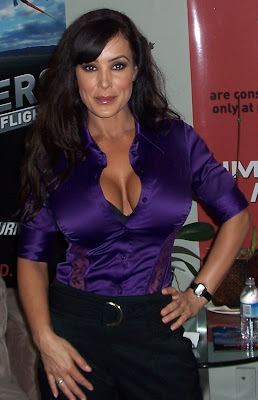 Then I got one with me and her together. 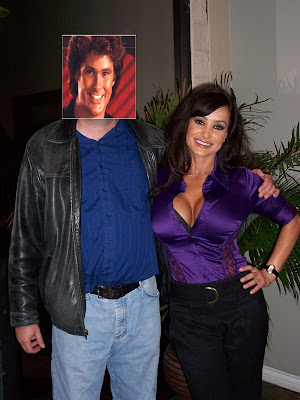 Notice the uncanny resemblance I have to David Hasselhoff. I wish I could tell you that Lisa Ann and I connected in a deep, meaningful way but I can't. She made a beeline out of the building a minute or two after that picture was taken. Farewell Lisa Ann. We'll always have this memory. Well, at least I will. 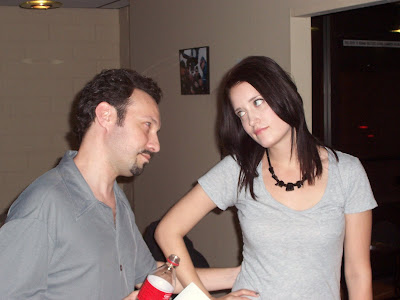 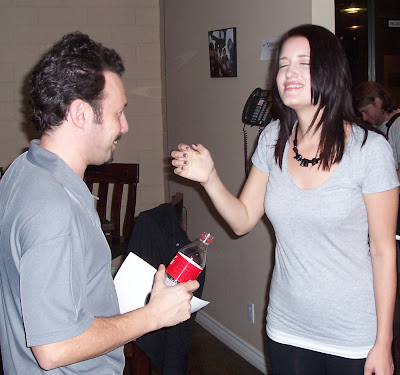 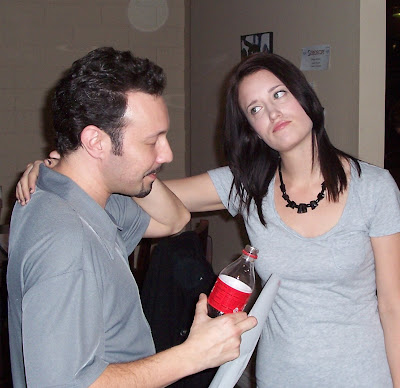 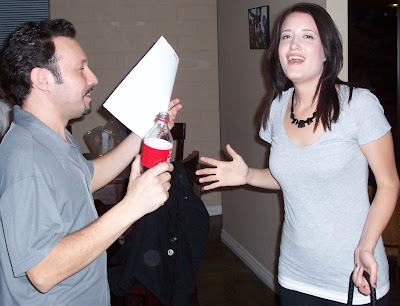 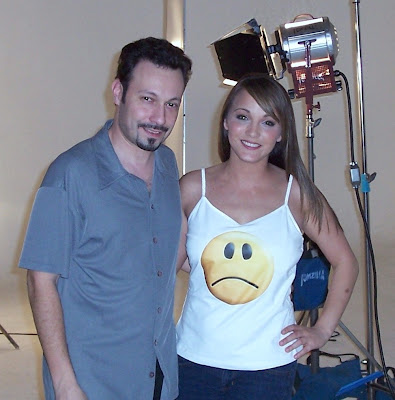 I had seen her in "Voodoo Dollz" and was excited about watching her work. She filmed a PSA just like the others but then filmed a second scene which involved taking her shirt off. Thank you Ms. Laine. You've just made my night. To make sure the scene went just right, Whiteacre got on the floor and removed her shirt for her to reveal her breasts. This is selfless dedication to your craft. There were happy-faced pasties on her nipples which conveyed the joy Charlie felt for people who don't steal her movies on the internet. So if you watch the Charlie Laine PSA, just know that it was Whiteacre who stripped her. A cherished memory for me. 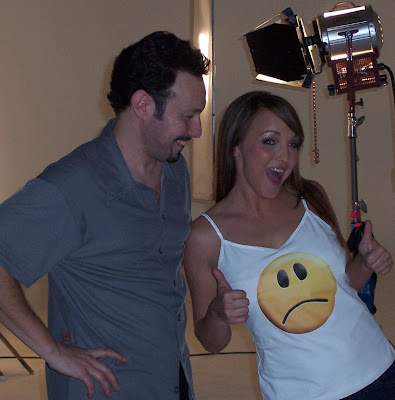 "The Hills Have Thighs" review 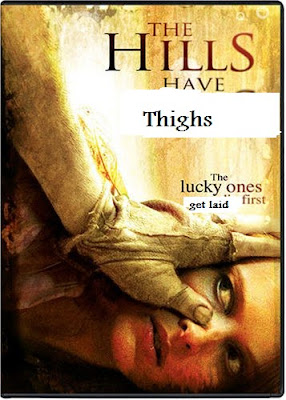 Frankie Cullen
Glori-Anne Gilbert
Rebecca Love
Kylee Nash
Brandin Rackley
Julie K. Smith
Diana Terranova
Julie Smith and friends are canvassing the desert for a place to have sex. One of their friends was last seen wandering through the valley of the large breasted cave women and hasn't been seen since. Can't they just let the man be? Maybe he doesn't want to be saved. But since he was good in the sack his friends need to find him. He is being held captive by mutated wild women Kylee Nash and Rebecca Love. They want to keep humping him until they drain him dry or until they find some other poor soul to satisfy their insatiable desire. Julie Smith and Brandin Rackley need to have plenty of sex so that they can have the strength to leave no stone unturned in their quest to ruin their friends cave girl orgy.
Speaking as a man who can't get enough of watching Julie Smith engage in erotic pleasure, I enjoyed "The Hills have Thighs". Horny B-movie kingpin Jim Wynorski invades late night cable with another large breasted homage to himself. Every sex scene has been filmed in some form or another in a previous Wynorski movie so why tamper with a proven formula. This time he is smart enough to let Julie Smith and her amazing breasts have three solid sex scenes. The first one has Julie showing her fidelity to her husband with some healthy marital sex in a motel room. The second scene has Julie and Brandin taking a break from their searching and indulging in some desert sapphic delight. The last scene has Julie under the influence of a sex spell and banging her friend's husband. All of these scenes showcased Julie's carnal skills and left me in awe of her as usual.
One of the exploitation elements you can always depend on in a Wynorski movie is large breasted women popping their tops. You can't depend on much else but I always take comfort in knowing that at least Wynorski loves topless women in movies as much as I do. Kylee Nash is the leader of the cave women and has plenty of cave women sex. She is frothing at the mouth during most of her sex scenes like any horny cave woman should. Her breasts are extra large and she unleashes them in many scenes for the viewer to enjoy. Rebecca Love is another large breasted wild woman who gets to release her cave woman breasts during many frantic sex scenes. Brandin Rackley is fun to watch as she seems to enjoy rolling around with whomever is naked with her at the time. And have I mentioned how much I like watching Julie Smith? Just amazing man. She has to be seen.
"The Hills have Thighs" is a typical Wynorski late night softcore movie. It has Julie Smith and her mind blowing body running wild so you know it's got to be good. Wynorski cut out a lot of filler to create a lean softcore flick that's heavy on sex and not much else. If you're up late one night and the "The Hills have Thighs" is on, it's worth a look. The women are savage and the breasts are abundant. You may want to stay lost in these hills.
SCORE: 2.5 out of 4 Julie Smith hills and thighs 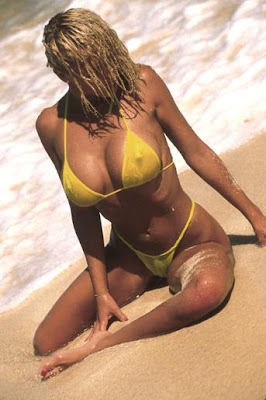 There's gold in those hills. 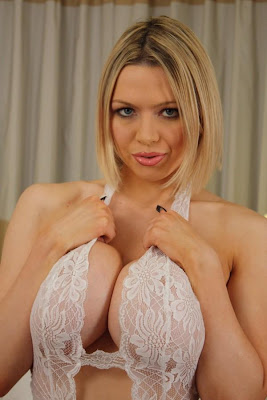