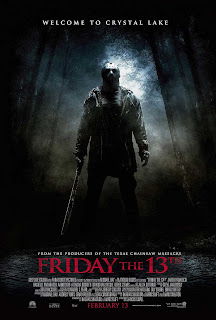 Jared Padalecki ... Clay Miller
Danielle Panabaker ... Jenna
Amanda Righetti ... Whitney Miller
Travis Van Winkle ... Trent
Aaron Yoo ... Chewie
Derek Mears ... Jason Voorhees
Julianna Guill ... Bree
Willa Ford ... Chelsea
America Olivo ... Amanda
A bunch of college students head to Camp Crystal Lake to do drugs, get laid and commit other sins that disturb the resident psychopathic monster Jason. A brother of one of the doomed partygoer's heads to the lake to find his sister after her encounter with the madman. A new batch of kids lands at the lake only to find their party disrupted by a hockey masked killing machine. Voorhees finds fresh meat has been left at his door and stalks them with ruthless efficiency. Jason will not rest until he slashes his way through every human who dares to annoy him by being alive in his presence.
"Friday the 13th" was about what I expected. It followed all of the slasher movie rules. There were topless women getting hacked, dealing in weed led to instant death and basically anyone caught breathing near Jason was marked for extermination. But while the kills were plentiful, they were lacking in ghoulish imagination. Other than the girl being roasted in her sleeping bag, the rest of Jason's slaughter felt like a retread of his greatest hits. His machete got a workout but after the third skull was split open it got a little tiresome.
Still, it's nice to see that the filmmakers at least tried to make this sequel scary. Jason had been turning into a joke over the years and he needed to get back to his sleazy slasher roots. I also liked the fact that they ran Jason through all of the stages of his 80's slasher style. He shows up as a boy in the beginning, (Part 1), segues into his bag over the head look, (Part 2) and then finally settles on his beloved hockey mask, (Part 3 through infinity). Jason dispatched these college kids with his usual workmanlike blood lust and bodies were eradicated in a timely manner.
Although you'd think that Jason's coming home party to Camp Crystal Lake would be a little more over the top. "Friday the 13th" ran through the slasher movie motions and delivered the bare minium of what was expected of it. But even though some more thought could have been put into the violent scenes, I still had a good time watching Jason run wild through the woods. The filmmakers have hit the reset button on Voorhees so a new generation can have nightmares over this maniacal boogeyman. Sounds like fun to me.
SCORE: 3 out of 4 Voorhees 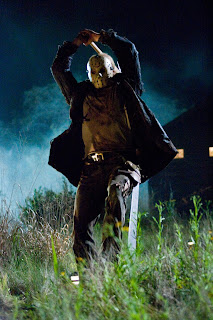 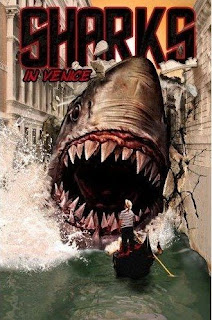 Director: Danny Lerner
Writer: Les Weldon
Stephen Baldwin ... David Franks
Vanessa Johansson ... Laura
Hilda van der Meulen ... Lt. Sofia Totti
Giacomo Gonnella ... Vito Clemenza
Ivaylo Geraskov ... Rossi
Atanas Srebrev ... Captain Bonasera
I saw "Sharks in Venice" with my brother and my friend. Watching sharks eat their way through the canals of Venice seemed like a reasonable enough plan for a Friday night. But when I pulled up to the house in Pasadena, they were nowhere to be found. It turns out they were ahead of the curve and had been drinking for most of the day. By the time they returned to the shire, they were almost completely sloshed. They knew that "Sharks in Venice" needed some serious self-medication to help ease the pain. I only wish I had followed their lead.
So there are sharks in Venice and no one cares. Stephen Baldwin gets called over to Italy after his dad disappeared down a shark's throat. Venice proves deadly for Baldwin as he is attacked by wave after wave of outrageous Italian stereotypes. Detective Carbonara and Police Captain Gorgonzola try to help Baldwin with his shark problem. All the while the Mafia is hot to get Baldwin in the water so he can retrieve the lost treasure of something or other. Kidnappings, gun fights and even an occasional Venice shark attack liven up the proceedings as Baldwin does battle with the Mafia and miles of shark stock footage. Capiche?
"Sharks in Venice" was predictably terrible. I shouldn't be surprised about this but somehow I am. You'd think that the impetus for pretending to make this movie would be for the cast and crew to live it up for a weekend in Venice. It may shock you to hear that there aren't that many scenes actually set in Venice. It's just one cheap scene after another pounding you over the head until you beg for mercy. Why wasn't I drinking before unleashing this on myself?
All I wanted was a scene where a shark circles a gondola and jumps up to eat the gondolier as he's belting out a love song. Was I asking too much? Of course I was. The shark attacks in this stinker are an afterthought as the real "action" involves Baldwin doing battle with various Mafia henchmen. When there are shark attacks, they're scenes from (cheap) National Geographic specials or they're (even cheaper) special effects. There was a boat attack scene but it was rendered so ineptly it doesn't count. It was the only scene worth spending more than ten bucks on but the filmmakers couldn't be bothered with such trivial details as making something interesting happen.
So unless your drinking heavily and want to laugh at Baldwin fumble his way around shark-infested Venice, you can let this one go.
SCORE: 1.5 out of 4 Venetian sharks 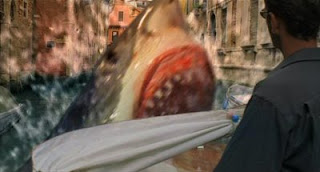 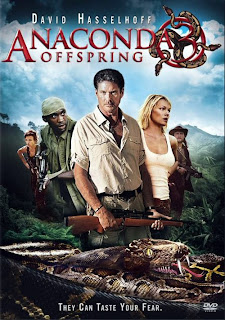 I saw "Anaconda III" with my brother. I gave him a choice between indulging in David Hasselhoff attacking giant snakes or watching "Bottom Feeder" so that we could observe the spectacle that is Tom Sizemore attacking a rat monster. Actually, it was no choice at all. When you have a chance to watch Hasselhoff put an anaconda in a headlock, you have to jump right in. It was snake time.
A giant anaconda may hold the key to curing diseases. They have it locked up in a laboratory so that it can have plenty of opportunities to escape. Haven't these people ever seen a B-movie before? Never put a monster in a laboratory. It's guaranteed disaster. Sure enough the snake plows through many different scientists as it makes its way to freedom. But this snake didn't count on the Hoff. Hunter Hasselhoff and other digestible actors gets called in to hunt down the ravenous beast. 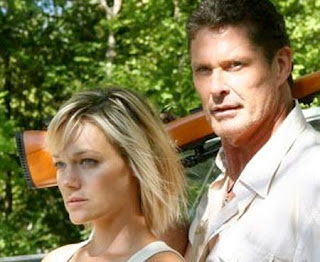 "Anaconda III" is one of those movies that just sort of happen. You rent it, you put it in the DVD player, you turn it on and the movie starts. An hour and half later it's over with no lingering side effects of joy or despair. It seemed like a good idea at the time. My brother and I agreed "Anaconda III" was a movie. That was about as positive as we could get.
"Anaconda III" has nothing to do with the first two movies in the series. Both "Anaconda" and "Anaconda II" were very enjoyable giant snake flicks. But even the mighty Hasselhoff cannot save "Anaconda III" from pure straight to video mediocrity. The snake effects are disgraceful. Theoretically they were hunting a giant snake but it looked more like a giant garden slug zipping by at a hundred miles an hour. If snakes really moved this fast they would have taken over the world. Even Hasselhoff would have been no match for them.
"Anaconda III" is a typical giant snake movie. It exploits the "Anaconda" franchise to rope in a few suckers to rent their cheap flick. There were a couple of gory parts to it which succeeded in keeping my brother and I vaguely interested. But when the blood stopped gushing we went back to sleep. Still, it does have that icon of cheese Hasselhoff in it which is always good for a laugh or two.
So if you want a good giant snake movie, check out the first two "Anaconda" flicks. But if you just can't resist the magnetic tractor beam that is a Hasselhoff snake movie, do what my brother and I did and jump right in. Have no fear for Hasselhoff is here.
SCORE: 2 out of 4 Hoffs 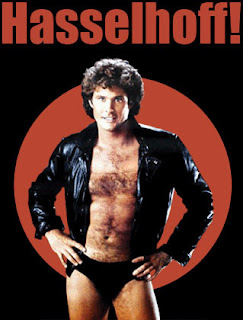 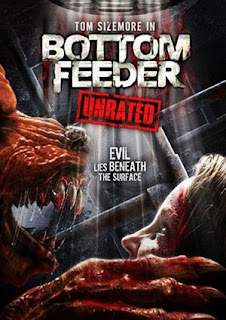 Director: Randy Daudlin
Writer: Randy Daudlin
Tom Sizemore... Vince Stoker
Wendy Anderson... Krendal
Richard Fitzpatrick... Charles Deaver
Amber Cull... Sam
Martin Roach... Otis
James Binkley... Nathaniel Leech
Simon Northwood... Wilkes
Tom Sizemore and his cleaning crew go to an abandoned hospital to take out the trash. Little do they know that a diabolical madman has turned a scientist into a carnivorous rat monster. Yes. That's right. I said a diabolical madman has turned a scientist into a carnivorous rat monster. The scientist was injected with a serum that makes you turn into anything you eat. So naturally, he finds time to chow down on a rat. He's now the Bottom Feeder. He wants to eat Tom Sizemore so he can turn into a real man. No one, but no one, takes a bite out of Sizemore and lives to tell about it. It's on.
Ahh Tom Sizemore. I've enjoyed watching his antics in many films. He was great in "True Romance", pleasantly insane in "Natural Born Killers" and ruthlessly efficient in "The Relic". Now there's "Bottom Feeder". It's a movie title that affords you many opportunities to make disparaging remarks but I'll control the urge. I don't know how Sizemore made his way to B-movie land but it's a testament to his skill that he still gives it his all as he's battling beasts in basements as only he can.
"Bottom Feeder" is a perfectly acceptable B-movie. I enjoyed watching Sizemore and friends sprint across a cheap set as a guy in a rat costume chased them around. It's a relief that "Bottom Feeder" didn't bother with cheap CGI and instead went for cheap makeup effects. That's really the key to enjoying a monster movie. You have to have a guy in a rubber suit attacking people. The bottom feeder attacked every human he saw, blood gushed out of their necks and everybody was happy.
"Bottom Feeder" is worth a look if you're in the mood for a monster movie. I wouldn't say it's Tom Sizemore's best movie but it's always nice to have a real actor show up to wreck havoc on evil abominations. Any movie is a better with a little Sizemore in it. Sometimes rat monsters deserve to fight the best. The best didn't show up but Sizemore was available. "Bottom Feeder 2"? It just wouldn't be a rat monster movie without him. 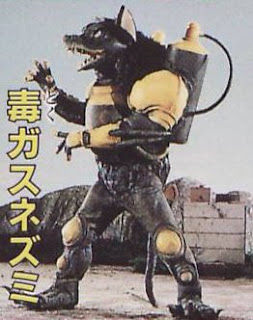