Stephen Spinella ... Lieutenant Chad
Jack Plotnick ... Accountant
Wings Hauser ... Man in wheelchair
Roxane Mesquida ... Sheila
Ethan Cohn ... Film buff Ethan
Charley Koontz ... Film buff Charley
"Rubber" is the story of a tire. An angry tire. When the rubber meets the road, it turns into a massacre. Tire rolls into town and wants to squash some heads. This tire has gotten so furious it has attained telekinetic powers. As it shakes like it's having a conniption fit, the object of the tire's hatred explodes in an orgy of gore. There's an audience on a hillside watching all of this tire carnage unfold. The tire hates them too. There's no reason why this tire is doing all of these hideously destructive acts. No reason at all.
Well, actually there is a reason that this tire is on a rampage. It's so that we can talk about the director and his kooky movie. I mean, haven't you ever seen a movie where disgruntled auto parts attack? Maybe this maniacal tire was the spare tire from "Christine" and got upset about being left in the trunk. We've seen cars attack before but never a tire. A lone tire out to destroy humanity. It's just kooky enough to work.
"Rubber" is a movie that exists for no reason. It's here to show us that movies don't need a reason to spring to life. All you need is to film something vaguely interesting, (in this case a killer tire), and someone to watch it and you have a movie. "Rubber" has a passive audience that sits on the sidelines watching the tire roll over dead bodies. The filmmakers want to slap the audience from their slumber so they drag them into the movie. They achieve filmmaker nirvana by destroying their audience. Truly, it's what all filmmakers dream of. Killing your audience, (critics), and laughing about it are what director's dreams are made of. But then who would watch their nonsensical films of homicidal tires?
"Rubber" is a wacky movie about killer tires that succeeds for no reason. I have always been a big believer in movie logic, (or lack thereof). If this tire wants to blow people's heads off, I say go for it. I don't need to know how or why it gained this incredible power. I only want to see it use it in regular intervals. So roll on you crazy tire. You don't need a reason to pop human brains out of their skulls. Just make sure when you do it, I can watch.
SCORE: 3 out of 4 hot babes with killer tires for no reason 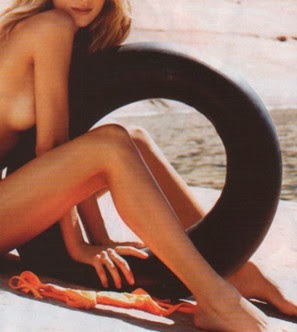 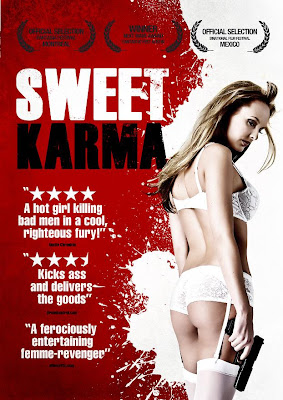 Shera Bechard ... Karma Balint
John Tokatlidis ... William
Frank J. Zupancic ... Stefan
Christian Bako ... Tomas
Laura McLean ... Mavra
Patricia Stasiak ... Anna Balint
Lana Koseniv ... Galina
Tanya Rusnak ... Franciska
Sasha Kovacs ... Redhead
Anna Beben ... Blondie
Sweet, sweet Karma is going on a rampage. Her sister has been sold into sexual bondage in Toronto and Karma wants revenge. The Russian gangsters who imported her sister over told her she'd be cleaning houses but she ends up polishing knobs. When Karma is told that her sister has been killed, she decides to extract justice as only a hot mute girl in an exploitation movie can. She hangs out in a strip club dressed in white lingerie looking for the right moment to strike. Many Russian gangsters will pay dearly for their lecherous ways.
Ahh, sweet Karma. Sweet, unforgiving Karma. I needed this movie. I needed Karma to blast her way through the underworld and she did not disappoint me. Shera Bechard is Karma and she is an exploitation movie treasure. The filmmakers have struck gold with Shera. In one scene, Shera hangs out in a strip club looking for an opportunity to kill the sleaziest pimp. She rushes the stage and gives an impromptu strip tease which naturally lures the pimp to his doom. This scene was amazing as was their fight in the bathroom. I will now have to think twice if a stripper offers me a chance to snort cocaine off of her breasts. "Sweet Karma" shows you the potential bloody downside to this sordid possibility.
"Sweet Karma" also makes me realize I haven't been to a strip club in awhile. Although maybe that's a good thing considering the people who are running it. One scene has the gangsters cursing over the lack of lap dances their stable has pounded their way through. This made me glad I wasn't a figure in organized crime's lap dance quota. But then another scene had Karma getting a lap dance from a large breasted blonde and I was feeling nostalgic for the club again. They even drop Stormy Daniels name as a feature dancer and it made me flash back even more to the strip club bump and grind. Oh Sweet Karma, why did you have to show the fun side of sin?
But Karma will not stand for gangsters exploiting women so she burns her way through the whole crew. There are scenes of rape, (which ends badly for the rapist), a catfight with a knife, (cat knife fight?), and various scenes of Karma vengeance. "Sweet Karma" had all the elements I like to see in fine cinema. Guns, girls, strip clubs and hot mute supermodels on a killing spree. I had a good time watching Shera dish out some bad karma. "Sweet Karma" is worth a look.
SCORE: 3 out of 4 sweet Sheras 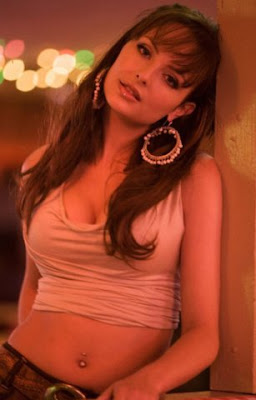