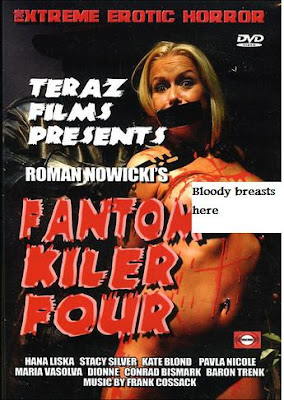 A killer is stalking naked women. If they're not naked when he meets them, they soon will be. The Fantom Kiler is on the loose and he is performing acts of depravity on any unwilling woman he can find. A hot babe inspector is on the case. Her detective and English language skills will be pushed to the breaking point. Women are dying horribly all around her and yet she just can't change her facial expression from one of complete indifference. Who can stop the Fantom Kiler from defiling these poor women? Does anyone want him to?

"Fantom Kiler 4" makes the big leap into scenes of hardcore horror. Well, I guess it wasn't a big leap. More like a small step into the pit of hardcore despair. The vagina gets a lot of closeups in this movie and there is usually something be shoved into it. The first scene has a naked woman standing on the side of a road waiting for a trick to pull up. Before this scene is over, she'll have a rapists penis in one hand and a corn cob being jammed into her vagina. The movie is not subtle.

"Fantom Kiler 4" drops all the foreplay and gets down to the hardcore horror fans of this series want to see. It is goofy and ridiculous and filled with scenes of nasty exploitation. I laughed my way through most of the movie as the hot inspector and her monotone delivery was B-movie gold.

Speaking of exploitation gold, there was one scene where a nympho police woman got her hands on the rapists severed penis and decided to use it one last time before booking it into evidence. This scene was pretty good as she used the appendage with gleeful abandon. But then the Fantom Kiler had to be a buzz kill and stopped her good times. Why did he have to ruin a perfectly good raging nympho? I guess we'll never understand the evil that lurks in the heart of the Fantom Kiler. We'll also never truly understand the appeal of these movies so it's best just to enjoy them for the nasty pieces of work that they are. The blood, the breasts, the paddling, it's all here.

SCORE: 3 out of 4 sleazy killers 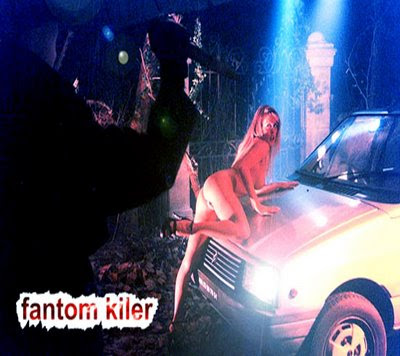