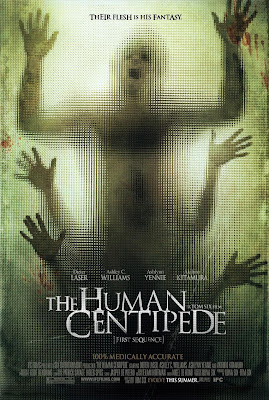 Dieter Laser ... Dr. Heiter
Ashley C. Williams ... Lindsay
Ashlynn Yennie ... Jenny
Akihiro Kitamura ... Katsuro
Andreas Leupold ... Det. Kranz
Peter Blankenstein ... Det. Voller
A man has a dream. A dream to show lesser mortals how to play God. He was known as a genius in the art of separating Siamese twins but he grew bored with the adulation. Now he envisions a world where people are joined together from anus to mouth. The Human Centipede dream. Truly, the noblest of human endeavors. In order to accomplish this miracle of science, he must find some very unwilling test subjects. Fortunately for him, two hot female tourists show up at his doorstep for anus/mouth arrangement in the secret laboratory. He grabs an Asian man from who knows where to round out the centipede. Will he win the Nobel Prize? Can this madman be stopped? And how does the middle segment of the Centipede eat? These and other questions will bounce through your mind as you watch the horror of centipede building unfold.
"Human Centipede" is a freak show. It is designed to get the filmmakers noticed for their sick and inventive ways of descrating the human body. This is a warped movie that takes great delight in showcasing unique human suffering. After watching the magic of centipede construction I have to tell you that I thoroughly enjoyed this fine film.
Oh, "Human Centipede". Where have you been all my life? I was smiling and laughing from beginning to end. The first scene in the movie has the mad scientist gazing longingly at a picture of two dogs getting extra close to each other. Right away, "Human Centipede" tells you where it is heading. The path it is on will take you to a disturbing exploitation movie.
When you watch a horror movie called "Human Centipede", there has to be a payoff scene that explictly delivers on the insanity the mad doctor is preaching. After a tense buildup, the doctor finally goes about achieving his dream. Asses and mouths are cut to the proper size but there is no shot of the doctor actually sewing the two together. Actually, maybe it's better that they neglected to show that. That's more of a private moment between doctor and patient.
Once the mighty human centipede is stitched together, the rest of the movie becomes an S&M horror show as the doctor enjoys disciplining his new creature. Why does the doctor enjoy hurting people so much? How does a man even come up with the idea of making someone give a permanent rim job? Alas, these questions won't be answered. It is not our place to know. The inner workings of the mad scientist will not be constricted by conventual morality. Or any morality for that matter. We can only observe his madness in action.
"Human Centipede" was the sick horror flick I was looking for. There's just enough gore, blood and twisted scenes to make even a jaded horror fan cringe. Certainly, it is not a movie for everyone but if you're in the mood for something harsh, "Human Centipede" will deliver the sick thrills.
SCORE: 3 out of 4 human centipedes 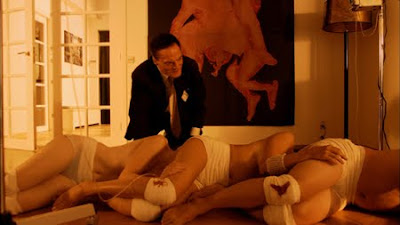 Nasty business being a centipede 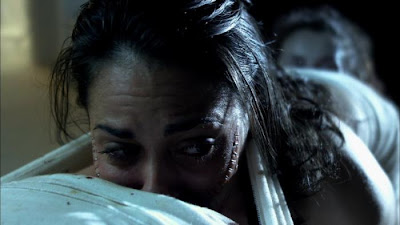