"Hobo with a Shotgun" review 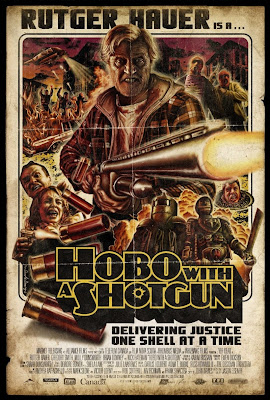 Rutger Hauer ... Hobo
Pasha Ebrahimi ... Bumfight Filmmaker
Robb Wells ... Logan (as Rob Wells)
Brian Downey ... Drake
Gregory Smith ... Slick
Nick Bateman ... Ivan / Rip
Drew O'Hara ... Otis
Molly Dunsworth ... Abby
Jeremy Akerman ... Chief of Police
Rutger Hauer has come to town to get some peace. All the man wants is a lawn mower. Unfortunately the corrupt B-movie town he's landed in just won't let him achieve his dream. The evil overlord who runs the show kills people just for fun. His two lackeys, (who dress like Tom Cruise), carry out his orders and massacre anyone who gets in the way. When they set their sights on a hooker with a heart of gold, Hauer has had enough. No one kills a gold-hearted whore with Rutger around. It's time to pump the shotgun and send these Cruise wannabes to Hell.
Death comes in many forms. Sometimes it's a creeping disease. Other times, a freak accident will claim a life. And sometimes, a hobo with a shotgun is the answer to your death wish. Hauer lands in the middle of a deliberately over the top B-movie with a loaded shotgun that he can't wait to unload. All of the scum have been begging for a face full of shotgun shells. This hobo is happy to oblige.
"Hobo with a Shotgun" is an exercise in B-movie madness. It succeeds in delivering violence, gore, and general mayhem as only a movie about a shotgun-wielding hobo can. Rutger Hauer is great as the homicidal hobo. He knows that the only way to handle a movie like this is to keep pumping the shotgun. Hauer does not let up on his slaughter until every last dirtbag has eaten some shotgun pellets. They say that violence only leads to more violence. And they're right! Good thing for us Hauer doesn't care about things like forgiveness. Only dealing death by shotgun lets him sleep at night.
After Hauer has caused quite a bit of havoc, the overlord of scum town unleashes The Plague. In the movie's most hilarious scene, two guys in body armor, (head to toe), show up at a hospital to take Hauer out. They are The Plague. One guy has a machete and the other likes to put a noose around people's necks and watch them dangle from the ceiling. Finally, a challenge for the hobo! The Plague captures everything that's good about "Hobo with a Shotgun". These maniacs might need their own movie.
"Hobo with a Shotgun" is a fun gorefest. It's badly acted, (with the exception of Hauer), poorly constructed and doesn't care if it makes any sense. Just like a good B-movie should. If you're in need of a sleaze movie fix, "Hobo with a Shotgun" has got you covered.
SCORE: 3 out of 4 homicidal hobos 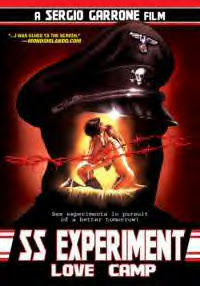 The SS are at it again. The master race needs to do some loving. They have set up a camp. An experimental love camp if you will. The experiments that they'll conduct on the enemy women will advance lovemaking technology by decades. Or at least a few weeks. Actually I have no idea what the love experiments are supposed to accomplish. I doubt the SS did either. All they know is that it's a hoot having absolute control over female prisoners in another sleazy woman's prison movie.
"SS Experiment Love Camp" is yet another Nazi woman's prison movie made after the great "Ilsa, She Wolf of the SS". It combines all of the things that we love about Nazi woman's prison movies. Nazi's, women and prisons. What a winning combo. This time the Nazi's are abusing poor, innocent women for the glory of the Third Reich. No wait, that's the plot of all these movies.
The Nazi's are bored and want to play around with the women they've captured. They've come up with many unnecessary experiments to pass the time before the Allies squash their decadent dreams of world domination. One of their games is to remove organs from the prisoner's bodies to see if they can live through the experiment. This is supposed to help understand battlefield wounds (I think). Or maybe it's just an excuse to see some blood and guts. Either way, the women don't last very long with their insides pulled out.
The Nazi's are also interested in lovemaking in bizarre situations. They have the super stud soldiers show the women how to do it in boiling and freezing water. Sometimes they even do it on a bed! There is no limit to what dastardly extremes these mad scientists will go to.
Speaking of extremes, the scientists leave their most fiendishly hilarious experiment for the end. The commander of the camp wants to take everything they've learned about organ transplants and work their magic on him. I don't suppose the commander realizes that every single one of the kook scientist patients died on him. No matter! Bring on the testicle transplant!
Yes, that's right. A testicle transplant scene. The commander needed some balls so he took them. This leads to the best line of the movie when the unwilling soldier hunts the commander down and wonders what he's been doing with his balls. Good question. Where oh where did his gonads go? The movie ends in blood and tears and lost testicles. It all adds up to a sufficiently entertaining exploitation flick that makes you glad you still have your gonads even if you've lost part of your mind.
SCORE: 2 out of 4 tainted love experiments 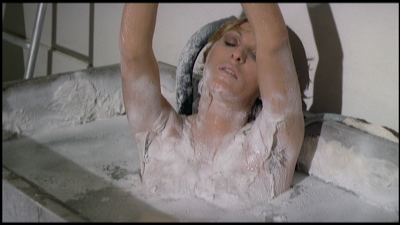