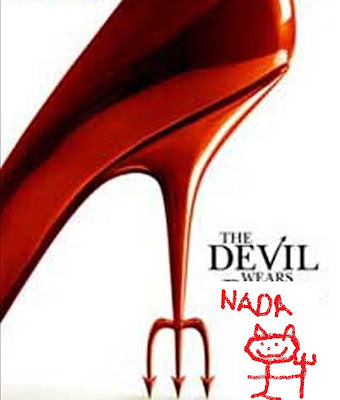 Christine Nguyen ... Candy Cane
Frankie Cullen
Beverly Lynne ... Miss Julia Crimson
Brandin Rackley ... Rebecca
Katy Magnuson
Franklin Pangborn III
Kevin Van Doorslaer
Lexi Belle
"The Devil Wears Nada" is about Jim Wynorski making money. I think Cinemax pays somewhere between $30K and $60K to rent the movie for their late night schedule. I'm sure Wynorski pockets all of it. I believe there is actually a shrine built to him in Cinemax's headquarters. Cinemax had to have a hot line installed so that they could stay in contact with him at all hours. Their late nights would be bare without his prolific softcore output.
"The Devil Wears Nada" is about Beverly Lynne torturing her assistants so that they'll get frustrated and have sex with each other. Christine Nguyen is the new girl and Brandin Rackley is the current assistant who has to train her. There's some intrigue and deviousness going on between Beverly and her assistants but I wasn't too interested. The plot breaks between sex scenes gave me some time to get some sleep before the next one started up. I could actually hear Wynorski snoring off camera during the dialogue scenes as well. I was as interested in the plot as he was.
When it comes to softcore movies, the key to success is casting. Actually, the key is making sure that the right cast members are dry humping each other. I'm a big believer in chemistry. Some people click on screen with their partner and others seem dazed and confused as to why they have to fondle a person they're not attracted to. "The Devil Wears Nada" showcases two extreme examples of bad chemistry and good chemistry.
When I saw that Beverly Lynne was in this movie, I got excited. She can be fun to watch as she struts through the softcore motions. Beverly has one sex scene in the movie. She takes Christine Nguyen into the shower for some tender lovemaking. This scene held infinite promise. These are two very experienced performers in the art of lesbian lovemaking. Surely, they would generate some heat in the shower.
But alas, this turned out to be an example of bad chemistry. So very bad. This sex scene was a disaster. Beverly and Christine were not into it on any level. They merely shifted their weight back and forth in the shower and prayed for Wynorski to yell cut. So now we know that Beverly Lynne and Christine Nguyen should never be in a sex scene again. How heartbroken I was.
Just when all hope was lost, Christine meets Brandin Rackley. Brandin sees that Christine is tense, (must be from the unfulfilling shower scene), and leads her to a bathtub. They engage in a sex scene which shows us the perfect example of good chemistry. What I'm trying to say is, it's freaking hot! Christine and Brandin are all over each other in a great lesbian sex scene. The kissing, the breast licking, it's all here. Wynorski should take it as a personal triumph that he put these two together. It is the highlight of the movie.
There are plenty of other sex scenes to distract you from the meaningless plot. Most of these scenes are decent but nothing exceptional. There are three different scenes of blonde women standing by a pool and making out with each other. Do you think Wynorski has a type? Could it be blonde women with large breasts? So remember ladies, if you want Wynorski to spend some of his vast softcore fortune on you, be blonde and busty. He can't resist.
"The Devil wears Nada" has one great sex scene, some filler scenes with a menagerie of blonde women and a bummer of a Beverly Lynne scene. But Christine and Brandin's makeout session in the bathtub makes the movie worth seeing. It is a great softcore scene which I hope will inspire future Nguyen/Rackley scenes. Just like Wynorski and a pile of money, putting the two together can be a powerful combination.
SCORE: 2.5 out of 4 hot blonde devils 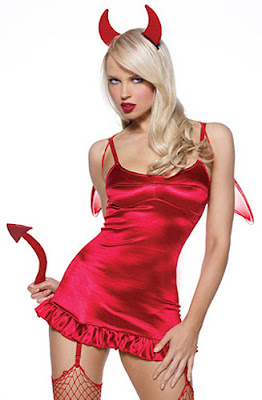 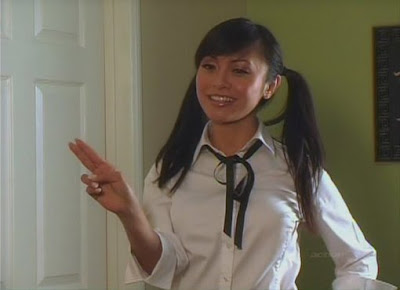 It`ll be no surprise for you to hear that i desperately want to bugger the chick in red and the cute little chink slag, those two birds are astonishing and if i could poke my knob up both of their lushious young bums (sunk to the nuts, as it were) my life would be complete. Heterosexual buggery is the only thing that makes my life worth living, everything else is (literally) a waste of time.

I finally saw "The Devil Wears Nada" in it's entirity Christine Nguyen and Brandin Rackley were amazingly hot. Beverly Lynne was also hot in her one sex scene. I used to have a boss who looked like Beverly Lynne. Did I enjoy going to work? You bet I did.

Was there overtime involved? And did your devil wear nada? Or was it business casual?

Its been 6 weeks since your last reveiw, i hope you`re doin` OK my old mate. Or better still i hope you`ve spent that time doin` nothing other than buggering an endless line of gorgeous 18 year-old birds ! ! !.

I was laid low for about three weeks and then had to play catch up for a little bit. Real life has this way of distracting you from the important things in life. Like drooling over topless women in late night skin flicks. But I'm feeling better now so I should be up and running soon. Thanks for asking.

Is there anyplace I can get this film on DVD?

I believe this one is out of print. But please write directly to Jim Wynorski and ask for a copy. Customer satisfaction is at the top of his priority list.