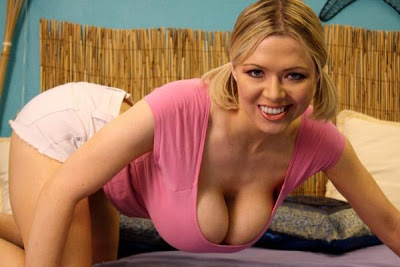 A bunch of busty women show up at Wynorski's backwoods timeshare for another late night adventure. This time Wynorski has become so bored with thinking up plots for his Cinemax pay days he has the women direct themselves in as many sex scenes as possible without disturbing his nap. Kylee Nash is the most busty, (bustiest?) cheerleader so she should clearly win whatever event she's competing in. Cheerleaders and Coed's run amok all over each other as sex scene after sex scene batters you into submission. The girls plot and scheme and rub chocolate sauce on themselves but nothing can arouse Wynorski from his slumber.

"Busty Coed's vs Lusty Cheerleaders" is another, (yes another!) Wynorski skin flick adventure. It is truly a cut to the chase late night offering. There's a loose plot about a hottie competition and the hottie's who compete in it. The cheerleaders are scheming against the coed's who are scheming against each other, etc. Judges get corrupted and coeds and cheerleaders get it on with great abandon. There's not a lot of filler here as Wynorski has the decency to keep the sex scenes flowing.

The best part of "Busty Coed's vs Lusty Cheerleaders" is Kylee Nash. She is truly a busty work of art. She has three sex scenes and they are all good. The first one has her by the pool with a judge as she does her best to seduce her. Good news, the seduction works wonders. There's a lot of quality nipple licking in this scene. The next sex scene has her banging some muscle bound guy who always manages to show up in all of these late night flicks. This time he gets to bang Nash and he makes the most of it. The last sex scene has her cavorting with a blonde women with a massive back tattoo in a pool. This is also a good scene as they both like to kiss and I like to watch. Yes I do.

Another hottie who makes it into this flick is Charlie Laine. She had a great lesbian scene in "Voodoo Dollz" and I was interested to see what she would do with the busty coeds. In a shocking turn of events, Charlie Laine, (who I thought was only doing lesbian scenes), has two sex scenes with men! Are you as shocked as I am? Charlie gets it on with two muscular guys and I was amazed. Actually, more amazed that Wynorski talked her into this than the scenes themselves. I was also amazed at the size of Laine's breasts. I believe they have been augmented since the last time I saw them. It must be a new day for Charlie. A new year, new breasts, new men to dry hump in softcore flicks. Good times ahead!

"Busty Coed's vs Lusty Cheerleaders" is not Wynorski's finest hour but he does manage to deliver the late night goods. At least with his softcore output he knows what he has to deliver. As long as the women with large breasts keep kissing each other, viewers will be satisfied. As for this viewer, I found the parts with Kylee Nash to be quite enjoyable. The rest was fair. Although I think Nash was robbed. She was clearly the bustiest and lustiest of them all. I'm not sure if bustiest and lustiest are actual words but they are now. If we keep using them to describe Nash, Webster will have no choice but to include them one day.

SCORE: 2 out of 4 bustiest and lustiest Nashs 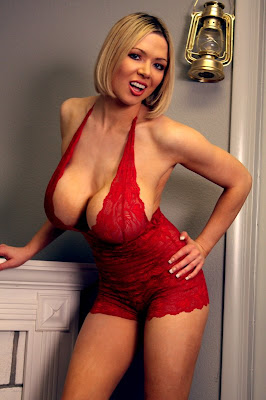 I'll need to keep an eye out for the DVD release.

"She is truly a busty work of art."
Awesome!

I loved this slice of Wynorsk-ocity. I agree, Kylee Nash was awesome. She's easily got a lock on Breast Actress 2011.

I want to tit-fuck Kylee Nash.

Charlie's boobs are actually still growing all on their own, Doc. They are truly natural wonders.

That is wonderful news. Whatever diet and exercise program she's on needs to be shared.

Dr. Gore, have you been to the Kylee Nash official site ?, theres a free trailer that you can watch and at the end of it Kylee's arse-hole comes into full veiw, its a truly breathtaking sight, i`d gladly give a million dollars to shove my knob up that birds bum.

I have been to that site and it is delightful. I'm more of a breast man although I can understand your enthusiasm for all things Nash.

As i`ve often said on this site its always better to bugger an 18 year-old bird than a 27 year-old bird, nothing will ever change my mind with regards to that. However, if the 27 year-old bird in question is called Kylee Nash you should make an obvious and completely understandable exeption ! ! !.

Tattoos make me sick. They ruin so many good late night shows. Its even worse when the guy is the only one wearing it.

Dr. Gore, you said one guy was too many in Voodoo Dollz. That's Nocole's ex husband Alexandre Boisvert, aka Voodoo. What would Voodoo Dollz be without Voodoo?

I have have to admit the twist at the end was unexpected and gave the flick a memorable scene. The 3 brunettes were hot as well.