"Land of the Dead" review


America has become the Land of the Dead. The humans hide behind large gated communities while the inhuman monsters scrounge around outside. Soon the zombies will start evolving and realize they want more from their undead existence than just pretending to live. They want what the humans have: Their brains, hearts, lungs, and other mouth watering organs. A few humans get together to stop the dead with the help of fireworks and some very large automatic weapons.

There may not have been as much subtext in "Land of the Dead" as some of the other Romero zombie movies for people to chew on but it worked fine for me. The only thing I want to see chewed on in a zombie movie is as many guts as possible. Romero knows how to stage effective gore scenes and "Land of the Dead" certainly doesn't disappoint. Once again the morally bankrupt humans invite disaster by dedicating their lives to cheap thrills. Zombie target practice, gladiator fights etc. The zombies have had enough of their so-called humanity. They'll set them straight on whose land this is. "Land of the Dead" is a fine zombie flick. I was pleased. It's got blood, guts, and Asia Argento killing zombies. What's not to like?

One last thing, how about that zombie Number 9? You know, the girl in the softball uniform carrying a baseball bat? That was some hot zombie action. Even with half of her face shredded off, I still thought she looked good. I'm glad she was stuck at the head of the pack with Big Daddy and the butcher. Thankfully she hadn't decomposed too much when the zombies started their rampage. You hate to see a zombie girl lose her looks to time, the elements, or death.

SCORE: 3.5 out of 4 zombie babes with baseball bats 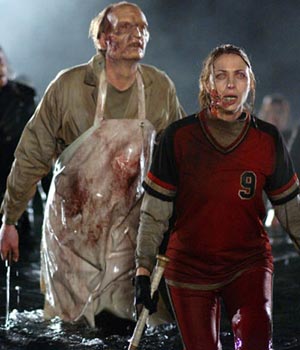 i agree on both counts, jennifer baxter was a stunning zombie chick, (even though she was 28 when this movie was shot in 2004 and there-fore 10 years past her peak), if only she could`ve been 18 at the time of filming, that would`ve been perfect, i think this is easily the best of romero`s 5 zombie films so far, and one of the best horror films, (of any kind), from recent years.

Ahh, zombie number 9. She just seems like an approachable zombie. You could try your luck with her until she decided to eat you. The risk would be worth the rewards. Not like those haughty Zombie Strippers. They just take your dollar and go for the jugular.