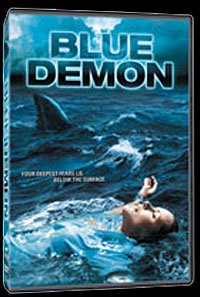 "Blue Demon" is about some genetically altered sharks that break out of a lab and cause havoc. Based on that description alone, you would think that this was going to be some "Deep Blue Sea" B-movie rip-off. I like B-movie rip-offs. In fact, I enjoy them immensely. But "Blue Demon" is just a rip-off in the general sense of the word. Like, "Wow! What a rip-off!" "Blue Demon" doesn't even have the common sense to know what good movie to rip-off. It's actually trying to be funny as the worst shark effects in the world bob along in the ocean. They have one cardboard fin that tears through the water at one mile an hour. Amazingly, these stupid sharks don't catch a lot of their prey. They also have another computer animated shot of the sharks swimming in a pack that looks like something I could whip together in a Power Point slide show.

Overall, "Blue Demon" is a very lame attempt at some cheap shark thrills. It must be avoided. You don't want this beast to inflict its pain on you.

SCORE: 1 out of 4 cut-rate fake sharks 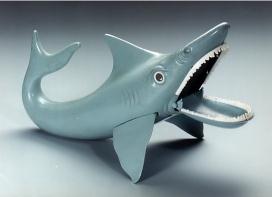 Oh, yeah it was definately lame. In trying to figure out where it was shot, they seemed to have started at Castaic Lake, then moved to Cachuma, then out to the sea to Zuma Beach with shots of San Francisco bridge. very weird, and one of the stupidist movies of all time

"Blue Demon" is the very essence of lame. When I think lame, I think "Blue Demon". They should have named it "Lame Demon". I could keep the "Blue Demon" bashing going all day but, well, you get the idea.

I think they filmed most of the movie on an old Commodore 64 and got some clips of a beach from another movie and stapled it onto their flick. The sharks definitely needed some work. When I say some work, I mean they needed to be tossed out and completely redone.

Sorry, I just can't seem to stop the bashing when it feels so good.

wtf!!!! the doctors drive a hyundai accent, the general has a chrome 1911, the female doctor didn't think to blow up the minds of the sharks before they started eating people. who wrote this? and how in the f*ck did they get funded? i have more talented shits! the only good part of the had on a red and white bikini!!!

I want to bugger Dedee Pfeiffer (in 1982 when the bird was 18, not as the bird is now obviously).

As bad as this turkey is I still wouldn't rank it in the same class as valley of the dolls or avatar it wasn't that terrible.