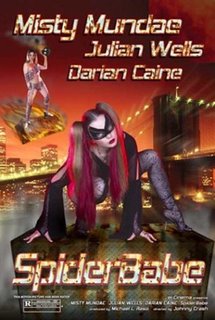 I got to admit. Misty Mundae looked good in this one. Her Spiderbabe costume worked wonders for her. Speaking of hot costumes, Julian Wells rides the Bi-Polar express in a tour de force performance as Femtilian/Lucinda Knoxx. I like her much more when she loosens up. Most movies she's in she has got some serious pouting going on. In "Spiderbabe", her dastardly experiment turns her into a lizard babe and lets her have some fun. We all win when that happens.

So Spiderbabe runs around town and makes out with a lot of women. The citizens of New York are very grateful. I especially liked the Queen B wrestler scene. That was some good wrestling. The truly amazing thing about "Spiderbabe" is that it actually made me laugh! Misty Mundae made me chuckle with her various job fantasies, especially being the nurse. Overall, I was pleased with "Spiderbabe". It's worth a look.

SCORE: 3 out of 4 Femtilian superbabes 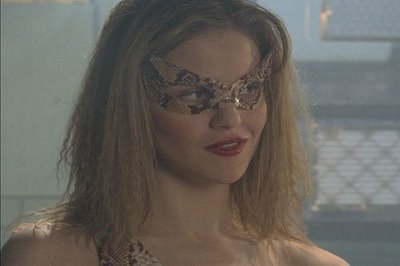