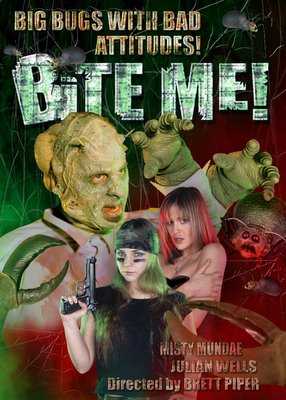 A bunch of spiders turn into blood sucking mutant spiders when they eat a super hybrid of pot. A crate of the stuff ends up at a strip club. The rest of the movie writes itself.

I enjoyed "Bite me!". It was a proud B-movie. One of the posters on the strip club manager's wall was for "Barbed Wire Dolls". I wouldn't put "Bite Me!" in the same category as that sleaze masterpiece but I had some fun watching it. The spiders were cheap, the strip club looked like an abandoned garage, the strippers were sleepy but "Bite Me!" is good for some cheap Saturday night entertainment.

I've given Misty Mundae a lot of grief but she's starting to grow on me. I think I like her better when she has her clothes on. She was pretty good in this one. Any girl who lets a blood sucking spider attack her can't be all bad.

The best scene has Julian Wells as the uptight businesswoman who loosens up when a spider chomps her. "You call that dancing?! I'll show you dancing." She then hops on stage to do some spider venom stripping. I rewound that scene four times. I especially liked the whip sound effect when Wells whips her hair around. She has got the hair toss down. Whip it Wells. Whip it good.