If there's one thing the world needs more of, it's killer centipede movies. In fact, I think "Centipede" is the first killer centipede movie ever made. I have seen all kinds of giant animals rampage on unsuspecting fools. Lions, bears, sharks, eels, rats, hogs, dogs, have all attacked humans at some point. So I was filled with great joy when I saw "Centipede" sitting on the shelf. I had to rent it immediately.

Well, like most B-movies, the concept is great but the movie is lacking. The centipede did not fill me with dread. It looked like a cardboard beast with some spray paint. At no point did I even remotely believe that the centipede was alive and attacking people. I understand the concept of suspension of disbelief but come on.

Another problem was the lack of lighting. Even if I wanted to see the cardboard monster, I couldn't make him out because a lot of the movie was shot in the dark. The characters are stuck in a cave in India with an angry centipede. The beast likes to strike in the dark. He's shy around cameras. The buddies try to out run the monster while the Indian police plan to blow it up. Plenty of cardboard monster attacks follow.

"Centipede" is too cheap and too cheesy. It's also PG-13 so that should give you an idea on the violence level or lack thereof. The ex-girlfriend was hot and can really stretch her legs but other than that there's nothing much here to recommend.

SCORE: 1 out of 4 cheap centipede monsters 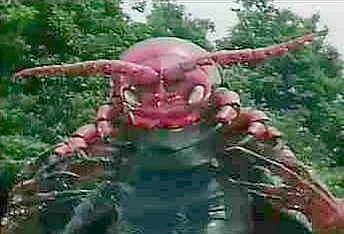 That centipede looks like a Power Ranger villain LMFAO! I appreciate you reviewing films like these. You always add something to my Netflix queue.