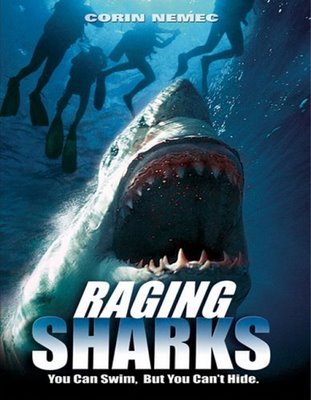 Any shark movie that starts off with an alien spaceship exploding is either zooming towards B-movie brilliance or crashing into complete disaster. "Raging Sharks" lands somewhere near the disaster line although parts of it I found amusing.

All shark movies spring from "Jaws". "Jaws" was not only the best shark movie ever made but also one of the best movies ever made. Every shark movie since then has tried to capture a little of its magic. "Raging Sharks" decides it wants it all. It wants a sci-fi angle, lots of growling sharks, a beach attack, some underwater lab attacks, and a little "Under Siege" action to boot. It was too much to digest, even for a raging shark.

So some gold canister from outer space lands in the ocean and causes the sharks to rage. Vanessa Angel works at an undersea lab and keeps staring at monitors screaming, "Get out of there! Get out of there!", as half her crew gets eaten. They eat everybody. Why the undersea crew keeps getting back into the water with hordes of angry sharks swimming everywhere is a mystery. Soon the sharks get bored and eat half the bathers in Bermuda in a long scene of shark munching. This was a good scene as the sharks howled like lions as they devoured their prey. This all leads to a submarine attack on the sharks and a lot of fighting with a bad guy in the lab and some other things the filmmakers decided to throw into the B-movie stew.

"Raging Sharks" just had too much on its mind. It should have been focusing on sharks. There's a good 20-25 minute stretch where the sharks disappear so Vanessa and her husband can do battle with a traitor in their midst. Now, if the sharks were breaking into the lab at the same time as their drawn out fight, then we would have had something. But the sharks were off raging somewhere else. Overall, "Raging Sharks" is a little wackier than the usual straight to video shark flick. If you like your shark movies with everything but the kitchen sink thrown in, you might get into it. As for me, I would let these sharks rage somewhere else. 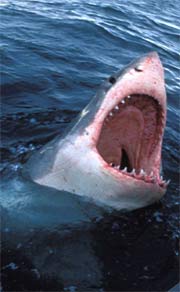