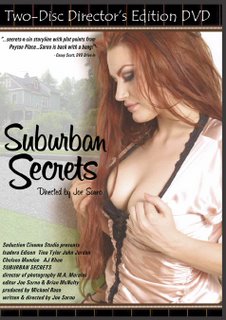 Isadora Edison is coming home to suburbia. Her old boyfriend Nelson is banging every girl he can get his hands on. Now he’s shacking up with Isadora’s Aunt Cynthia, (Tina Tyler). This makes Nelson’s sister Judith rage with jealousy as she wants his lips all for herself. Isadora also wants a piece of the Nelson action and drags him into bed as soon as she lays eyes on him. This all leads to a domino effect through town as the whole city hops in the sack with each other. Whether the sex partners are related to each other is not a concern. It’s actually a turn-on for them if they are.

“Suburban Secrets” brings up an interesting moral dilemma for the viewer. Namely, is it wrong to get off on incest sex scenes? Should I be really getting into the fact that a brother and sister are having sex or should I be repulsed? One of the main strengths of “Suburban Secrets” is that it tries really hard to be dirty. This is something you don’t see in the usual softcore flick as they are normally quite content to have anonymous bodies squirm all over each other. In “Suburban Secrets”, every sex scene is full of lust and guilt. These people want each other and they don’t care if they’ll bump into each other again at the next family reunion.

Now I can’t really say whether it’s wrong to enjoy scenes where an aunt and her niece are having sex but I’d be lying if I didn’t admit that I loved every second of it. It’s the feeling of uncontrollable lust that makes “Suburban Secrets” sex scenes that much sweeter.

Isadora and her aunt’s sex scene was top notch. There was a lot of kissing on the couch which segued into an extended bedroom session. AJ Khan had a pretty good sex scene as well with Chelsea Mundae and her boyfriend near the end of the flick. I think it’s the first time I’ve ever seen Khan in a sex scene with a man. Actually, A.J. just concentrated on Mundae but it was good to see her branch out a little. Another good sex scene had sinful sister Judith paying a visit to Isadora to convince her to leave Nelson alone. She gave her a lot of nipple pulling and sucking. She was very convincing.

The filmmaking technique used during the sex scenes is what really makes “Suburban Secrets” stand out from the rest of the softcore flicks out there. Their technique was that there was no technique. Every sex scene is shot the same way: Turn on the camera and let them go at it. Genius! No more dive-bombing on the sex or editing it so fast you have no idea what is going on. There are plenty of long takes as the viewer becomes the ultimate voyeur and stares straight out at the couples. There’s also no music used during the sex scenes which adds to the fun so you can take in all of the sights and sounds.

“Suburban Secrets” is one of the best softcore flicks Seduction Cinema has made yet. It’s right up there with their gold standard, “The Seduction of Misty Mundae”. It’s a two and half hour long romp through sinful suburbia. Any softcore fan will get into it. Well worth a look. 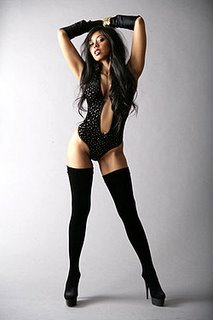