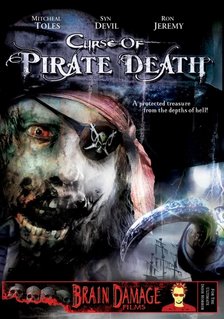 A bunch of teens decide to mess with an undead pirate. Their teacher pushes them to check out their family roots and go dig for buried treasure. Since most of this desert town was founded by pirates, (and we all know pirates sailed their mighty ships deep into arid wastelands), the teens probably descended from one or two of them. Hopefully their desert pirate blood will boil and they’ll find the hidden treasure of Pirate Death. But the curse of Pirate Death brings, well, death to anyone who steals from him. Many halfwits will bleed gallons of blood as Pirate Death takes a few hundred stabs at them for stealing his gold.

If you were ever confused about what the phrase “B-movie” meant, look no further than “Curse of Pirate Death”. It will clear that problem right up for you. Basically the cast wanders around the desert, picks up some pieces of treasure and then a big zombie pirate, (who’s seen too many “Leprechaun” movies), attacks them while his obnoxious metal soundtrack blasts in your eardrum. When you hear metal, it’s killing time.

Speaking of pretty girls, there are plenty here to share in the blood spilling duties. Only one of them gets naked though. Once again Syn DeVil comes through for the B-movie fans out there and gets topless on many occasions. That kind of dedication warms my heart and other areas. The rest of the women stay clothed until their eventual demise. Shame, shame. I was kind of hoping the teacher was going to do something naughty with her students. She had Syn right where she wanted her but was content to just tickle her. More shame.

SCORE: 1.5 out of 4 swashbuckling Syns 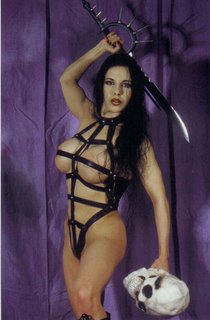 hello dr.gore. my name is denisse bon, one of the students in this movie. mostly i just wanted to thank you for bothering to watch this movie. sincerely, thank you. you are the only one i know that has watched the movie volunterily. of course not including friends & family. thanx for the review, i mean that sincerely, again. i know there are plenty other movies to watch. thanx for choosing "curse". i got to meet syn. she's a very nice girl. im glad i got to meet her. take care doctor, ill be eating my apples, till next time, thanx again. denisse bon. dbon73@yahoo.com

Thanks Denisse for taking the time to leave a comment. I'm sure a couple of other people besides friends and family will be watching this flick. Never underestimate the B-movie fans. We'll watch anything. Even movies about undead pirates hacking people up near a big white wall.

As your B-movie doctor, I advise you to keep eating your apples and get plenty of exercise in case another zombie pirate comes after you.

Hi Dr.Gore,long time reader first time writer.As a huge fan of this movie and b-movies in general I just wanna say that this movie is great 10 out of 10 from me,this movie has it all,Syn DeVil,Randal Malone and the lovely Denisse Bon who has already been in touch with you and Gina Vendetti,I know it's not the greatest movie of all time but it makes me laugh and for me that's all that counts.And like you said if you like b-movies and you can find this cheap you could do alot worse.
P.S.you are one of the few reviewers I trust,keep up the great work.

Thanks for writing. And for reading. Glad you like my reviews.

I wouldn't go 10 out of 10 for this movie but it did have a certain amount of B-movie charm. Syn DeVil is always fun too as she exhibts a lot of her abundant charms as well.

As for the lovely Denisse Bon, I hope she's still eating her apples as you can never be too healthy when running from psychotic zombie pirates.

Hello Dr. Gore My name is Des. I like the review you posted. I got the movie because I actually made the Necklace that Syn Devil is wearing in that great topless Scene.