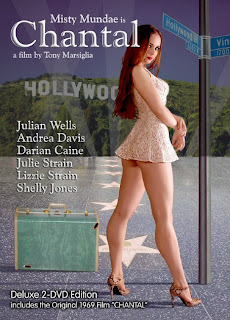 “Chantal” is the tale of two muses. The first one drives me crazy for all of the wrong reasons. I’m talking about Misty Mundae AKA “Erin Brown” who is an incredibly prolific lesbian softcore star. She makes me wonder why that statement is true. Guys love her girlish body, women love to kiss her but I don’t get the appeal. She still inspires my reviews like no other. I love writing about her and my continuing quest to understand the Mundae phenomenon. Of course even Mundae doesn’t want to understand it as she is leaving Seduction Cinema behind for…for what exactly? Going to something or running away from the past? It’s too soon to tell but I have to admit she has been a big part of my writings.

The second muse is Julian Wells. There’s something about Julian that gets me going in the right direction. Her long legs, her freckled chest, and her “sexier than thou” attitude all inspire me to write about her time and time again. She has paired up with a couple of different girls in the Seduction flicks but it’s with Mundae that she shares the best chemistry. Come to think of it, I think Misty Mundae is the key to Julian’s success in these sex scenes. Misty likes to be dominated and Julian is always on top. Their sex scenes are always good with “The Seduction of Misty Mundae” scene not only being their best together but one of the greatest softcore sex scenes ever. So I suppose I needed Misty Mundae all along to bring out the best in Julian Wells. How ironic.

“Chantal” brings the two muses together for a trip through hellish Hollywood. Chantal, (Mundae), comes to L.A. to be a bright shining star. Mundae has the annoyance factor cranked up to eleven as she plays Chantal as the most dimwitted simpleton you can imagine. Chantal doesn’t know what an agent or a headshot is which leaves her vulnerable to the dogs of L.A. She gets taken advantage of until she meets her presumed guardian angel in the form of Julian Wells. Wells lets her accompany her as an escort for a night so we can get at least one sex scene in this movie. Chantal spirals down into madness after Wells leaves her. Isn’t that always the way?

As a softcore flick, “Chantal” disappoints. There are two sex scenes in the movie with the Wells/Mundae scene being the only good one. Of course, “Chantal” wasn’t really set up to be the traditional Seduction Cinema lesbian flick. I found it kind of interesting to see Wells and Mundae talk about the harsh realities of living on the unforgiving streets of L.A. If you’re a Seduction Cinema veteran, you might get into seeing Mundae going through the motions of an innocent girl getting exploited by Hollywood. If you’re just looking for cheap Sapphic thrills, you should probably skip this one.

One last thought, if “Misty Mundae” is retired from the world of Seduction Cinema, what does this mean for “Julian Wells”? The IMDb doesn’t seem to have any new Wells adventures on the horizon. Well, actually there seems to be two more left but I believe they were filmed awhile ago. Mundae’s exit from the scene takes Julian’s best partner out of the picture and I fear it could be the end of “Julian Wells”. This fills me with despondency as this means my internet love affair is slowly coming to an end. We had a few laughs. Things are different now. I’ll find other B-movie babes. But man, it won’t be as much fun. 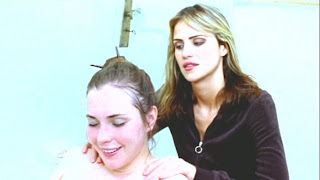