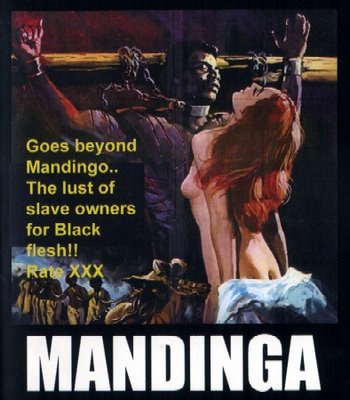 I bought this one for five bucks at my local video store. The cover has a white woman embracing a black man while he's chained up. Did someone order a sleaze sandwich? Yes sir! "Mandinga" is an Italian rip-off of "Mandingo" that is hot and ready to eat.

As the movie begins, we see life on the plantation: Slaves getting whipped, slaves talking back and then promptly getting whipped. Lots of whipping. A white woman is lectured about how she should never lower herself and have sexual relations with a slave. Then she immediately has sex with a slave. The slave is chained up so she jumps on him. Well, at least the video box cover didn't lie. Soon the white man running the plantation has sex with a chained up slave woman. This is all in the first fifteen minutes.

So besides interracial slave sex, what else does this movie have on it's mind? Not much. The plantation owner's son comes back from England. He is going to run the plantation and have sex. He falls for the local preacher's daughter and some family drama happens. More chained up slaves have sex with their masters.

All in all, I counted about eight sex scenes. There is a nice, sordid vibe running through "Mandinga". I would bet there is another, harder version of this flick running around. But even this version was pretty strong for softcore. I can only recommend this one to the most fervent admirers of B-sleaze. Everyone else should avoid.

SCORE: 2 out of 4 for interracial sex down on the plantation 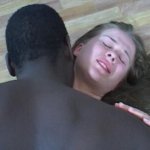